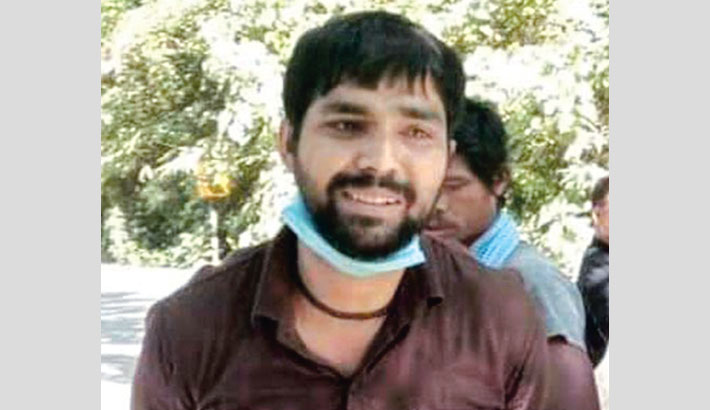 Farid Uddin, superintendent of police (SP) in Sylhet, briefed journalists at his office in the afternoon that the district police captured him from the bordering area. Akbar might have returned from India or was trying to flee to the country, he said.

“Now, we will hand over him to Police Bureau of Investigation (PBI), the investigation authority of the case,” the police officer said.

In response to a question regarding Akbar’s capture by Khasia people in a video footage, the officer said that no Khasia people but the district police arrested him with the help of their local sources.

A committee has also been formed to investigate whether anyone helped him flee the scene, the officer replied to a question.

Sylhet Range DIG Mofiz Uddin Ahmed was present during the briefing and he said that police would not spare anybody for his crimes.

After bringing SI Akbar to Sylhet SP office, several hundred people gathered there and chanted slogans demanding capital punishment for him. The agitating people also thanked the Khasia community for capturing him from their area.

Sources said that some Khasia people of Indian state of Meghalaya held him from Dona slum on Sunday night. Later, they handed him over to Bangladeshi Khasia people on Monday morning.

Being informed, police came to the spot and arrested him at about 1:00pm.

A video footage on SI Akbar’s arrest shows that a number of youths tied SI Akbar dressed in jeans pant and shirt.

SI Akbar was humbly requesting them not to beat him. One of the youths was asking his name. In response, he said that he was Akbar. Another youth told him that he killed a man only for Tk10,000. In response, SI Akbar said that he did not kill Rayhan rather he sent him to hospital for treatment.

Afterwards, the youths were found to take him away tying his hands.

On October 11, Rayhan, a resident of Neharipara at Akhalia in Sylhet City, died in custody of Bandarbazar Police Outpost in the city after he was picked on the previous day. Next day, Tahmina Akhter Tanni, wife of Rayhan, filed the case with Kotwali Police Station, alleging that her husband was tortured to death.

According to the case statement, Rayhan went out for work on October 10 afternoon and his mobile phone was found off after 10:00pm.

Later, around 4:30am next day, his mother received a call from an unknown number.

During the call, Rayhan urged her to bring some money to the police outpost to get him released.

Rayhan's stepfather Habib Ullah reached the police outpost with Tk 4,000 around 5:30am and a policeman asked him to bring Tk 10,000 around 10:00am, the case statement said.

When he again went to the police outpost with the money in the morning, he was told to go to Sylhet MAG Osmani Medical College Hospital where he found Rayhan dead.

The forensic report has found 111 injury marks in the body of Rayhan.