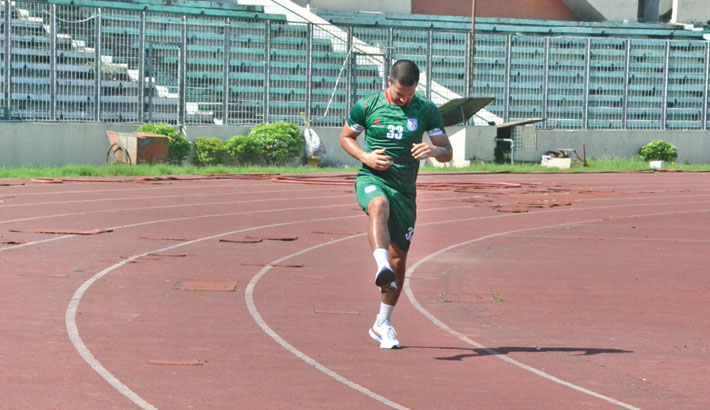 Finland-born Bangladeshi footballer Tariq Raihan Kazi, who got his maiden call-up in the 36-member national team for Nepal friendlies, said that his dream of playing for Bangladesh finally came true. The 20-year defender arrived in the capital on Tuesday and started practice with others from Thursday after a two-day quarantine.

“Dream of playing for Bangladesh comes true. But the main goal is to play well for the team. However, I’m feeling good. I came here two days ago and today in the training I've got to know them (teammates) better,” Tariq told the reporters after the day’s practice at Bir Shrestha Shaheed Sepoy Mustofa Kamal Stadium.

“I will train hard to get a chance in the final squad. I will give my best on the pitch. The weather is totally different here. It is cold in Finland but it is warm here. I got used to the weather, so there will be no problem,” the defender, who is also playing for Bangladesh Premier League (BPL) champions Bashundhara Kings, further added.

Bangladesh Football Federation (BFF) decided to resume football in the nation with two FIFA tier-1 international friendlies between Bangladesh and Nepal, scheduled to be held at Bangabandhu National Stadium (BNS) in the capital on November 13 and November 17 respectively.

Ahead of the matches, BFF announced a preliminary squad of 36-member and started a residential camp from Friday. The footballers have been joining the camp into several phases. The first batch including four officials and 16 booters joined the camp with their COVID-19 test results on Friday. The second batch of five booters joined on Tuesday.

Nepal are likely to arrive in the capital on November 5. Their players and support staff were requested to test for COVID-19 at least 72 hours before their flight. Both teams will undergo COVID-19 tests for the second time on October 10. BFF also decided to allow a few numbers of spectators in the upcoming matches.