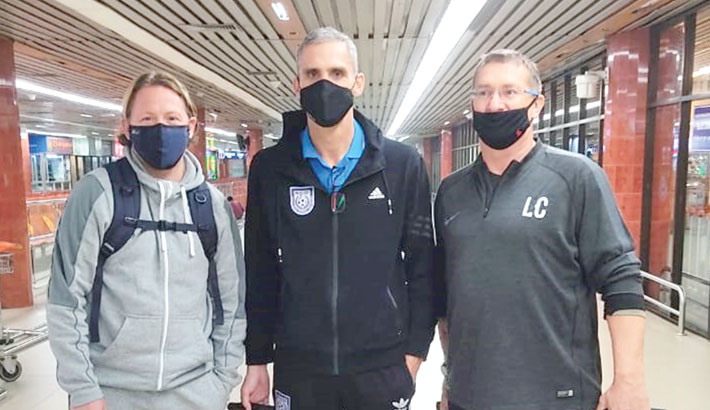 Jamal arrived in the capital from Denmark at morning while Jamie, Watkiss and Cleevely came from UK at noon. All of them were now staying at quarantine, confirmed a Bangladesh Football Federation (BFF) official to The Daily Sun. “They are now at quarantine. They gave their samples for COVID-19 tests and will remain quarantined until we get test reports,” the BFF official added.

Jamie, Watkiss and Jamal left Dhaka after AFC postponed all matches of preliminary joint qualification round 2 of FIFA World Cup 2022 and AFC Asian Cup 2023 and BFF postponed the domestic league due to the pandemic outbreak in March.

Returning to their workplace after a long break, the head coach told the reporters, “It has been a long time in the UK and looking forward to getting back to work in Bangladesh. We have two good games against Nepal. Good to see the boys getting back to training. We obviously want to win but that won't be the main focus. It is about getting the boys playing and these games are going to be the foundation to build on for the next year.”

BFF extended Jamie’s contract in June. The 41-year-old English man, who has been coaching the national team and Under-23 team since May 2018, became the longest-serving foreign head coach of the national team.

The federation also extended the contract of Watkiss who has been working since June 2018. Watkiss also played the role of BFF Technical Director for three months until February this year. Apart from them, BFF appointed Cleevely as goalkeeping coach and Ivan Razlog as fitness coach in October. Cleevely replaced former goalkeeping coach Robert Andrew Mimms who signed a contract with Indian club East Bengal.

After joining camp, the newly appointed goalkeeping coach Cleevely told the reporters that his first task would be to assess players' fitness, mental and technical ability.

However, BFF decided to resume football with two FIFA tier-1 international friendlies between Bangladesh and Nepal, scheduled to be held at Bangabandhu National Stadium (BNS) in the capital on November 13 and November 17 respectively. Ahead of the matches, the federation announced a preliminary squad of 36-member and started a residential camp last Friday. The footballers and coaching staff joined the camp into several phases.