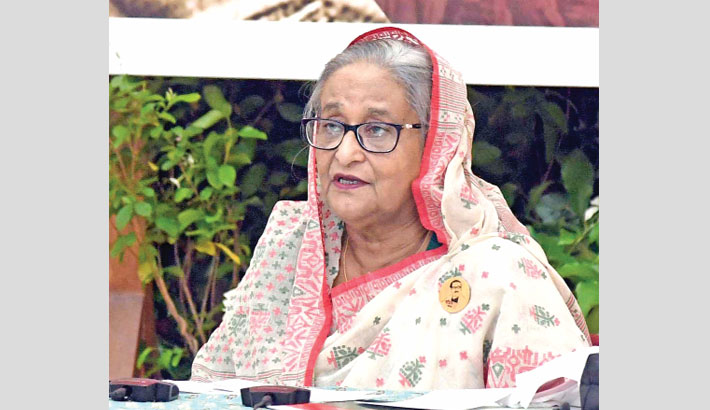 Prime Minister Sheikh Hasina said on Thursday that her government has taken responsibility for running the country to take it to a more dignified position by making it self-reliant in every aspect.

“We’ve shouldered responsibility for running the state to take it to a more dignified position by achieving self-reliance socioeconomically without seeking help from others,” she said while virtually addressing the ‘Swadhinata Purashkar-2020’ (Independence Award-2020) handover ceremony from her official Ganabhaban residence in the capital.

“We’re a victorious nation as we’ve achieved independence through the Liberation War, defeating Pakistani occupation forces and their local collaborators. As a victorious nation, we’ll move around the world, keeping our heads high with due dignity. We won’t seek any help from others like baggers as we’ve to stand on our own feet,” she said.

The Cabinet Division organised the function from Osmani Memorial Auditorium in the capital.

To achieve dignity, Sheikh Hasina said her government has been working tirelessly to reach healthcare service and power to every house, ensure education for all, develop the communication system, provide houses for homeless and landless people and make the countrymen self-reliant

economically. The premier said Bangladesh had lost the possibility of achieving the dignity with the assassination of Father of the Nation Bangabandhu Sheikh Mujibur Rahman on August 15 in 1975. But, assuming office after 21 years, the Awami League has once again started its journey towards making Bangladesh a “Sonar Bangla” envisioned by the Father of the Nation, she said.

Sheikh Hasina congratulated recipients of the Independence Award-2020, saying the government has given the award this year to those personalities, who have immense contributions to the country’s independence as well as its socioeconomic advancement.

On behalf of the Prime Minister, Liberation War Affairs Minister AKM Mozammel Haque handed over the award to recipients in recognition of their glorious and outstanding contribution to their respective fields. Prof Dr AKMA Muktadir on behalf of the awardees expressed his feeling on receipt of the highest civilian award. Each of them was awarded with a gold medal weighing 50 grams of 18-karat gold, a certificate and Tk 500,000.

Cabinet Secretary Khandker Anwarul Islam moderated the function and read out the citations with brief life sketch of the recipients.

Sheikh Hasina said her government has taken various initiatives to restore the country’s dignity which was destroyed by military dictator Ziaur Rahman as he gave foreign postings to the killers of the Father of the Nation.

Ziaur Rahman not only gave indemnity to the killers of Bangabandhu but also stopped the trial of war criminals and released them from jail after the assassination of the Father of the Nation, she said.

She continued that the military dictator coming to the power by violating the constitution also brought back the war criminals who fled the country with Pakistani passports, to the country and made them cabinet members and advisers.

She added that the Father of the Nation had initiated the trial of war criminals soon after the independence and arrested 21,000 persons in this connection.

Prime Minister Sheikh Hasina said they tried the killers of Bangabandhu and initiated the trial of war criminals for committing crimes against humanity during the country’s Liberation War in 1971 and thus regained the country’s dignity.

The post-1975 government also tried to erase the name of the Father of the Nation and banned the Historic March 7 speech, which inspired millions of people to join the Liberation War.

The Prime Minister has once again requested all to follow health guidelines properly to remain protected from the second possible wave of the Covid-19 as Europe has been rattled by the fresh surge of the disease.

She, however, expressed her firmness that Bangladesh would definitely advance towards prosperity and development due to the governments’ timely measures despite the entire world getting stuck for the pandemic.

The PM prayed for salvation of the departed souls who died of COVID-19, including “Swadhinata Purashkar-2020 recipient Azizur Rahman. She also wished early recovery of coronavirus patients.