United Against CORONA-Express Through Art 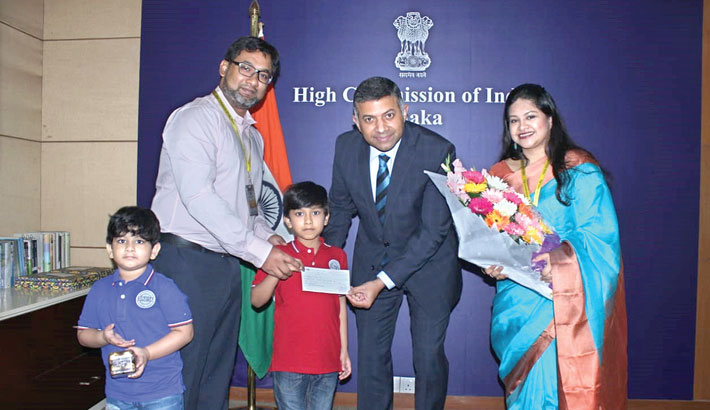 Indian High Commissioner to Dhaka Vikram K Doraiswami hands over a cheque for $1000 to Anzar Mustaeen Ali in a ceremony on Tuesday.

Anzar Mustaeen Ali, a six -year-old child from Bangladesh, has won a special prize for his beautiful art work at a global art competition conducted by Indian Council for Cultural Relations (ICCR).

Indian High Commissioner to Dhaka Vikram K Doraiswami handed over the cheque for$1000 to  Anzar  Mustaeen Ali in the presence of his family in a ceremony held at the High Commission of India in Dhaka on Tuesday.

The ICCR  launched  the  global  painting  competition ‘United  Against CORONA-Express  Through  Art’ during  the  tough  times  of  the  COVID-19  pandemic.  The competition elicited an overwhelming response from across the globe.

The objective of the event was to generate artistic expressions of emotions, feelings, ideas and innovative thoughts among artists across the world in the fight against COVID-19.

More than 8,000 artworks were submitted for the art competition from around the world from which 210 artworks were shortlisted after a first round of selection. The final jury evaluated and decided the winners from each category  such  as  Indian  and  Foreign,  Professional/Amateur/Children  in  four  different sections: Contemporary Art; Folk and Tribal Art; Cartoons and Illustrations and Digital and New Age Art.  ICCR has welcomed the fact that maximum number of entries were from Bangladesh.

It may be mentioned that, six other art works from Bangladesh were selected for showcasing at the digital art exhibition of ICCR.