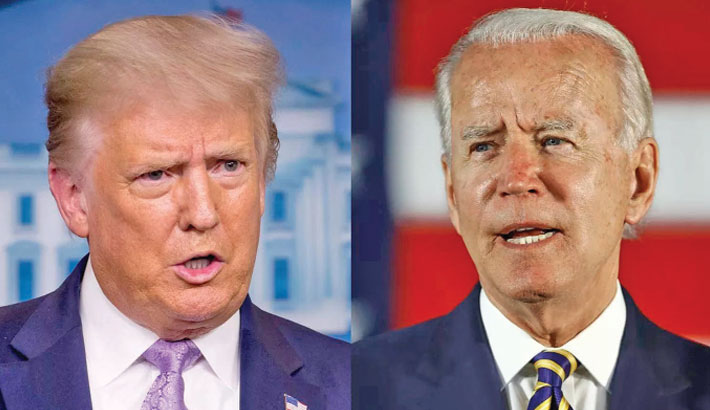 MARTINSBURG: President Donald Trump on Monday barnstormed Pennsylvania with three mass rallies and his Democratic opponent also made a surprise appearance, hoping to defend his lead in a swing state that could well decide the outcome of the election in six days, reports AFP.

Hopping from rally to rally, Trump demonstrated how badly he wants to claim the state on November 3, telling large, enthusiastic crowds of supporters to ignore polls showing Biden leading there and across other battleground states.

“We get Pennsylvania, we win the whole thing,” he said in Allentown, before flying to another rally in Lititz, then a final event in Martinsburg in the evening.

Trump touted a poll from Rasmussen, which has long gone against the flow of more established polling companies to give him favorable numbers, and said many “hidden Trump voters” would back him in the polling booth on November 3.

Biden, who has maintained a startlingly low profile during his campaign, made a surprise appearance in the Pennsylvania town of Chester, making the short trip from his home in neighboring Delaware where he’d been scheduled to spend the day without public events.

Sticking to his main campaign theme, he hammered Trump’s response to the Covid-19 pandemic, accusing him of giving up on mastering the virus.

“He said we’re not going to control it. The bottom line is Donald Trump is the worst possible president, the worst possible person to try to lead us through this pandemic,” Biden said. Trump “doesn’t have any idea of what to do or he just doesn’t care.”