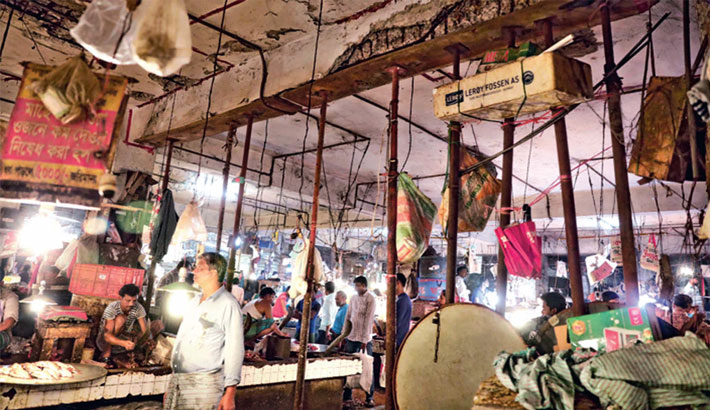 People do the shopping at Karwan Bazar, which has long been in a terrible condition. - SUN photo

Traders are engaged in locking horns with Dhaka North City Corporation (DNCC) authorities over vacating 17 dilapidated markets due to risk of fatal accidents.

DNCC officials said some 17 shabby markets may collapse at any time as those markets have not been renovated for years.

Traders alleged that the DNCC authorities are requesting them to vacate the markets without arranging any alternative.

The DNCC pasted stickers marking the markets as risky ones at the beginning of this year and urged the traders to vacate their shops without making any alternative.

Turning a deaf ear to the danger sign, small traders continue to run their businesses amid the risk of accidents only to manage meals for their near and dear ones.

Traders alleged that though DNCC announced the markets as risky, they had not taken any move to renovate the markets.

Besides, they are still charging rent, they said.

Traders said though DNCC announced the markets risky and ‘abandoned’, they have never run renovation or maintenance work.

Besides, breaking out of fire and falling off plaster are regular incidents in the markets.

Fire incidents took place two times at Gulshan-1 DNCC Kacha market and some portions of the market collapsed but still it is in operation.

Talking to the Daily Sun, Abul Kashem, a shop owner of DNCC Gulshan 1 Market, said, “We have heard for last 30 years that the market is risky. But, we have never been asked to vacate the markets.”

Late mayor Annisul Huq had a discussion with the traders to run the renovation of the market by a developer. After his death, it got stuck.

“DNCC neither asks us to vacate nor forward any proposal to shift or renovate or other alternatives. We must know if anyone put stickers to vacate the market spaces,” he said.

Abdur Rashid Rashed, president of Karwan Bazar 1 City Corporation Market, said, “Our market is built in 1963 and we have operating it since 1965. I have never seen that city corporation repaired the building and took any care of it. When the market develops crack or gets damaged, we repair it.”

“They [DNCC] said that it is risky building but they never take step to renovate it. DNCC collects revenue regularly but not eager to take care of the building,” he also said.

Recently, this correspondent visited some markets of Karwan Bazar and others areas and found that the ceilings of most of the markets are damaged. Cracks were also seen in different parts of those markets.

Md Tuhin Khan, a trader at Karwan Bazar 1 No Market Building, said, “We have been listening for the last 25 years that the building is risky but the building was never renovated by the city corporation authorities. Roof and floor of the market got damaged.”

Rajab Ali, a trader of Karwan Bazar 2 no Kachamal Arat Market, said the city corporation finished off their duty by leasing out the shops after setting up the markets. Though they have been collecting the rent regularly, most of the city corporation markets were not repaired since those were built.

Chief revenue officer of DNCC Md Abdul Hamid Mia said most of the buildings are more than 30 years old and no renovation work has been carried out in those buildings.

“We have asked them [traders] to vacate the buildings. As they are using our buildings, we are collecting revenue from them,” he also said.

“Now I cannot say specifically the names of the markets,” he told the correspondent over phone.