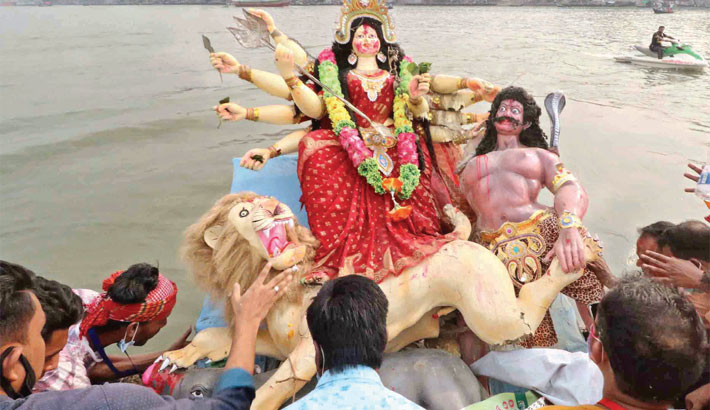 The photo of an idol taken immediately before it is immersed in the River Buriganga on Monday, marking the end of the Durga Puja, the biggest religious festival of the Hindu community. - Md Nasir Uddin

Sharadiya Durga Puja, the biggest religious festival of the Hindu community, ended on Monday with the immersion of idols of goddess Durga and her children on the fifth day of celebration, reports UNB.

To avoid the risk of transmission, maximum 10 people at a time were allowed on a truck taking the idols for immersion.

Processions from different areas in the capital ended at the Waiz Ghat on the banks of Buriganga River in the evening. Tearful devotees bid farewell to Durga and her children Lakshmi, Saraswati, Kartik and Ganesh while wishing for their return next year.

As part of the main rituals of Dashami Puja celebrations, the female devotees gave vermilion at the feet of Durga at mandaps and temples across the city, as part of the traditional ‘Shidur Khela’. The ritual follows Hindu women put the vermilion on each other aspiring the prosperity in lives, as a tribute to the power of Devi Durga.

Nirmal Kumar Chatterjee, general secretary of the Bangladesh Puja Celebration Committee, said, “Instructions have been followed during immersion which was devoid of the usual processions of Bijoya Dashami. The concerned mandap and temple authorities have performed immersion on their own initiatives in compliance with the hygiene rules.”

The Kumari Puja, another significant attraction of Durga Puja celebration, usually held on the eighth day known as the Maha Ashtami at the Ramakrishna Mission in Dhaka, was not arranged due to the ongoing pandemic.

According to the latest information provided by the Bangladesh Puja Celebration Committee, Durga Puja was held at 30,223 mandaps across the country this year, compared to the 31,397 mandaps in 2019.

There were 233 puja mandaps in Dhaka city this year.