Snail collection a means of their livelihood 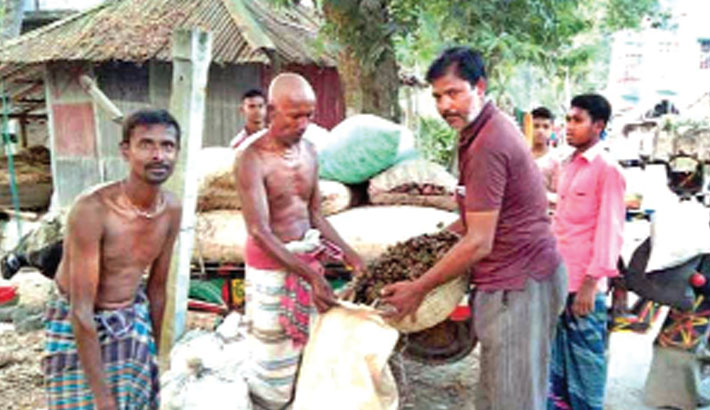 BENAPOLE: Around 200 low-income families are earning livelihood by collecting snails from different ponds, lake, swamps and wetlands in Sharsha upazila of Jashore district.

Now there is no work in rural areas due to the coronavirus situation.

Without having any alternatives, low-income and unemployed people are earning their living in different ways.

It has been reported that a section of poor people in eleven unions of Sharsha upazila collects snails from rivers, canals, beels, haors and ponds all day-long.

The snails collected during the day were brought to the designated place. Later they sold it to snail traders. They sold it at the rate of Tk 5 per kg and run their household with the income earned.

The work of collecting snails goes on from the Bengali month of Ashar to Kartik. Many snail collectors said that the water in all the water bodies is very toxic this year.

As a result, many of them affected skin diseases. Even after that, many people are being forced to do this work in need of livelihood.

So we forced to choose a different profession and make a living by collecting snails for a few months of the year.

Shankar said that I get 60/70 kg of snails every day. I am running my family with whatever income I get from it.

Rajab Ali of Pakshiya village said that there is not much activity of coronavirus at this time. So every day from morning till 2-3 pm 50/60 kg snails collected in different water bodies. The family lives on what they earn by selling at 5 taka per kg.

Sarani and Minu of Jale Palli village said, we are poor people, we are hungry day after day. I am collecting snails to run my family as there is no work at present. However, this year the water of the canals, Beels, Haors is completely poisons.

But I am forced to do this work.

Akram Hossain of Wapda Khalpara, a snail trader in Sharsha upazila, said he buys 65/70 mounds of snails a day from 200 low-income families in 11 unions of Sharsha.

He sold these snails at the Snail warehouse of Kapalia Bridge Bazar in Dumuria, Khulna. He said snails are processed in machines and used as food for fish enclosure, like prawn. He added, ‘This year, the number of snail collector has suffering itching deceases due to water poisoning.

More than 500 low-income family members had been collecting snails before last year.