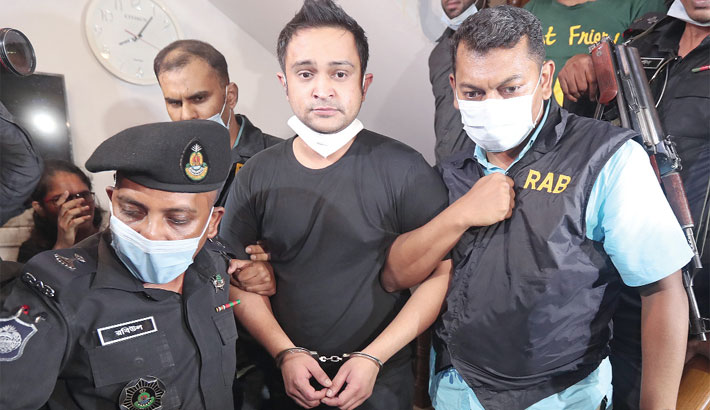 A mobile court of the Rapid Action Battalion (RAB) on Monday sentenced Erfan Salim, son of Dhaka-7 lawmaker Haji Salim, and his bodyguard Mohammed Zahid to one year in jail for illegally possessing walkie-talkies and liquor.

Erfan Salim, councillor of Ward 30 of Dhaka South City Corporation (DSCC) and his bodyguard Zahid were given the punishment following their arrest from Haji Salim’s residence on the day.

A RAB team led by Executive Magistrate Sarwoer Alam arrested Erfan Salim along his with his bodyguard Zahid and driver Mizanur Rahman in a raid on Haji Salim’s residence in Lalbagh area of Old Dhaka on charges of assaulting Navy officer Lieutenant Wasif Ahmed Khan.

Contacted, Lt Col Ashique Billah, Director (Legal and Media) wing of RAB, told the daily sun that a team of the elite force conducted a drive at Haji Salim’s house and arrested Erfan Selim and his bodyguard Zahid.

A firearm, foreign liquor, walkie-talkie sets and a handcuff were also seized from the house during the drive, he added.

“There is no licence for the firearm. The walkie-talkies are also illegal, these black walkie-talkies can only be used by members of the law enforcement agencies” he added.

According to witnesses, a car first hit the motorcycle of Lieutenant Wasif near Labaid Hospital when he along with his wife was returning home after buying some books at Nilkhet around 7:45pm. Suddenly, a few men got down from the car, assaulted the Navy officer and his wife.

The attackers fled away leaving the car behind as people started to crowd the scene.

Later, he filed a case against Erfan Selim, his driver Mizanur Rahman, bodyguard Zahid, protocol officer of Madina Group AB Siddique Dipu and 2-3 unnamed persons in connection with the incident on Monday morning.

According to the case statement, a private car hit Lieutenant Wasif's motorcycle in Dhanmondi when he and his wife were returning home from Nilkhet. Later, some people came out of the car and hurled abuses on him and his wife and left the place.

When the car stopped near a traffic signal, Lieutenant Wasif knocked the window of the car and introduced himself as armed forcers’ officer, after which passengers got down the car again.

“Then the accused from the car started saying together, “I will see your navy / army, I will your lieutenant/captain. I will kill you now,” they said and started punching and abusing my wife” according to case statement.

The accused physically assaulted Lieutenant Wasif and immediately run away, leaving the car behind, the case statement said.

On duty police rescued Lieutenant Wasif and detained the driver along with the car.

The incident was captured by some people on their mobile phones and it went viral on social media.

In the video, it was seen that the victim is introducing himself as armed forces’ officer Lieutenant Wasif. “The car hit my motorcycle. I wanted to talk to the car inmates. I gave them my identity. But they started beating up me. Even my wife was not spared. I don’t know the reason for the attack.”

“They have beaten me and my wife. They could have killed me. Being an officer of the armed forces, I narrowly escaped by applying self defence tricks. Thanks to Almighty!”

It is learnt that Haji Selim’s son and staffs were inside the car bearing registration number Metro Gha 11-5736. A sticker used by the lawmaker was also stipulated on the glass of the car.

Meanwhile, a Dhaka court on Monday placed Erfan’s driver Mizanur Rahman, who was arrested soon after the incident, on one-day remand in connection with the case.

Asked about his health condition, he said “Alhamdulillah fine and I’m in good custody of Bangladesh Navy.

Despite repeated attempts, Haji Salim could not be reached over phone.