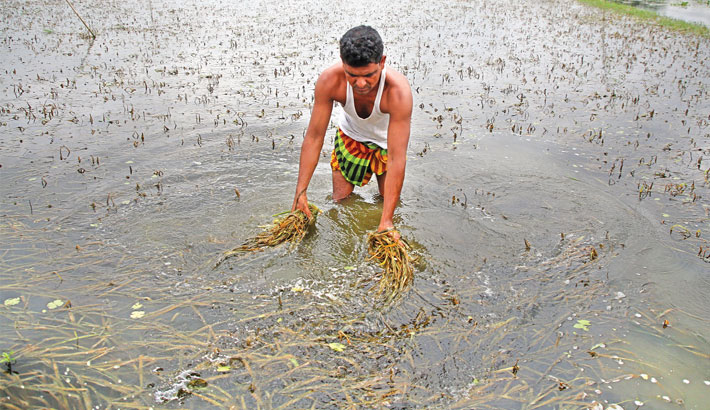 A farmer removes the damaged paddy plants from his field after flood in Singair upazila of Manikganj district. (File Photo)

Aman paddy and other crops worth Tk 20 billion have been damaged by devastating floods in 37 districts of the country, resulting in a rapid rise in their prices.

The Department of Agricultural Extension (DAE) said Aman paddy on about 61,500 hectares of land has totally been damaged by floods.

The fourth-phase flood has ruined crops, including Aman, green chilli, peanut and winter vegetables, worth Tk 6.97 billion in 24 districts.

Floods hit the many districts of the country four times this monsoon, causing havoc on crops, livelihood and houses.

The severe damage to crops has led to an increase in prices of some essential food items like rice, onion, potato and vegetables.

A total of 145,480 hectares of land in the country went under floodwater. Crops on 69,146 hectares have been totally destroyed by the last-phase flood, according to the DAE.

Aman paddy, winter vegetables, green chilli, peanut, mung bean and some other corps have been damaged by the flood, it said.

Vegetables on around 2,948 hectares of land and mung bean on around 4,215 hectares have totally been destroyed.

Dr Md Abdul Muyeed, director general of the DAE, told the daily sun that Aman paddy has mostly been affected by the fourth-phase flood and some other crops, including vegetables and chilli, damaged.

He said they have taken various incentive packages to help the flood-affected farmers get back on their feet.

“The DAE is providing all kinds of technical, input, advice and other support for farmers so that they can cultivate alternative crops now on their croplands,” he added.

The fourth-phase flood hit late September when thousands of farmers were cultivating crops on their fields.

Thousands of farmers made their land ready for cultivation after having spent money and labour on removing tonnes of mud and debris the previous flood had brought to their land.

Aman rice is the second most important staple of the country and its accounts for more than 38 percent of the country’s total rice production.

Earlier on 19 August, the Ministry of Agriculture disclosed that the three phases of flood have damaged crops worth Tk 13.23 billion in 37 districts.

Crops on a total of 257,148 hectares of land have been inundated by the flooding while crops on 1, 58,814 hectares were damaged.

In the first phase of flooding, crops on 41,918 hectares of land in 14 districts have been damaged in the period from January 25 to July 9.

At least 343,957 farmers have been left counting heavy losses while crops worth Tk 3.49 billion destroyed, the agriculture minister said.

Crops worth Tk 9.74 billion have been damaged and 929,194 farmers affected by the natural disaster.