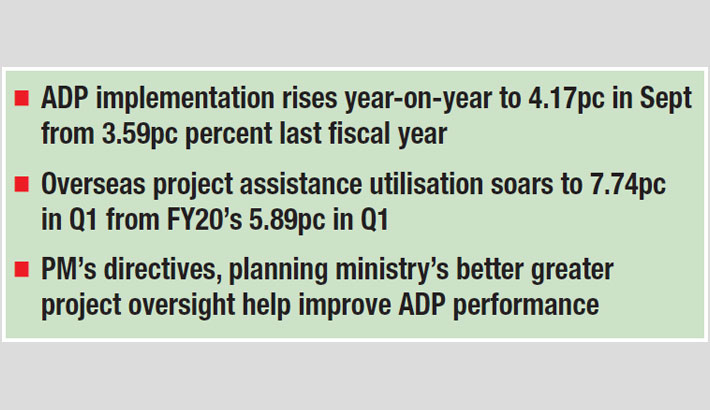 The government development activities bounced back to the pre-Covid-19 level as Annual Development Programme (ADP) implementation maintained a bullish trend in the first quarter.

Usually, ADP performance remains low in the first quarter, but it got an acceleration in July-September period even though the first two months’ data of ongoing FY’21were somewhat gloomy due to two months’ lockdown in the wake of the pandemic.

The performance is much higher compared to 3.49 percent, 5.19 percent and 3.86 percent performances in the previous three fiscal years for the period.

In the month of September, ADP implementation soared to 4.17 percent with Tk89.50 billion total spending, which was even higher than 3.59 percent or Tk77.17 billion ADP utilisation in the same month in FY’20.

“ADP implementation has gained pace from the first quarter of this fiscal year as workers and officials have returned to project work after the lockdown,” commented Dr AB Mirza Aziz,former finance adviser to the caretaker government.

“In view of a disruption in ADP implementation in the last fiscal year, the Planning Ministry has taken the matter of timely and quality ADP implementation very seriously,” IMED Secretary PradipRanjanChakraborty said. In this regard, Prime Minister Sheikh Hasina has put special emphasis on the implementation of ADP projects on time, maintaining quality, he added.

As part of the Planning Ministry’s intensified efforts, Planning Minister MA Mannan has sent warning letters to the secretaries of the ministries lagging behind in ADP implementation, the IMED secretary added.

PradipRanjanChakraborty, who joined IMED two months earlier, claimed that IMED is trying to come out of it traditional pattern of work, which has reflections in the present boost in ADP,and is likely to improve future performance as well.

In August, the planning minister sat with secretaries of 30 ministries and a number of project directors and instructed them to speedup the project work, Planning Commission sources added.

Even though in terms of percentage ADP performance was the same in the first quarter this fiscal, the volume of expenditure slightly remained low at Tk173.01 billion compared to Tk173.44 billion expenditure a year earlier as ADP size is smaller this year.

However, the project assistance utilisation rate improved to 7.74 percent with Tk54.58 billion expenditure from this segment, much up from 5.89 percent or Tk42.26 billion PA spending in the quarter a year earlier.

In recent years, ADP allocation has gradually increased, but in FY’21, the allocation has been slashed to Tk2,146.11 billion as part of the government austerity measures due to Covid-19. In the last fiscal year, ADP outlay was Tk2151.14 billion.