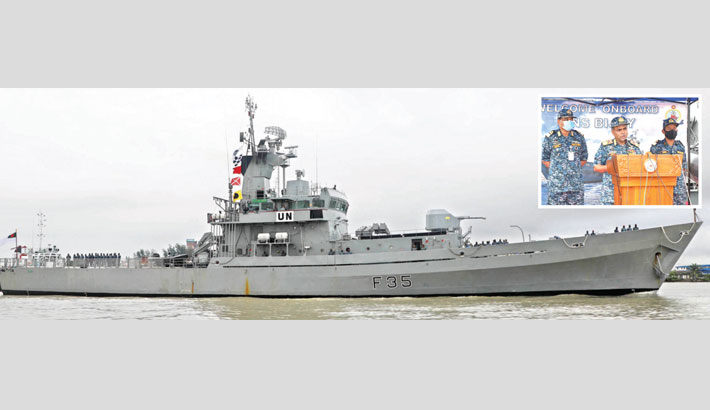 Bangladeshi naval ship ‘BNS Bijoy’, which was damaged in an explosion at Lebanon’s Beirut Port on August 4, has returned to the Chattogram Naval Jetty on Sunday after successfully serving the UN peacekeeping mission under the Multinational Maritime Task Force in Mediterranean Lebanon.

Chief of Naval Staff Admiral M Shaheen Iqbal received the ship at Chattogram Naval Jetty.  At the time, the chief of naval staff congratulated all the officers and sailors present on the ship for the successful completion of the mission.

The ship left for Lebanon on December 1, 2017 to take part in international UN peacekeeping operations. During the stay in Lebanon for the last three years, 330 members of the Bangladesh Navy have been on duty on the ship with utmost efficiency, professionalism, sincerity and discipline.

After completing its duties, BNS Bijoy left for Bangladesh on September 24 this year and reached the country after crossing about 10,020 km of sea route.

BNS Bijoy was damaged and at least 21 members of Bangladesh Navy were injured in the powerful explosion in Beirut, which left more than 170 people dead and over 6,000 others injured on August 4. BNS Shongram was sent as a replacement for the damaged BNS Bijoy on August 9, while the damaged ship was taken to Turkey for repair. BNS Shongram is currently serving in Lebanon for the UN peacekeeping mission in the Mediterranean.