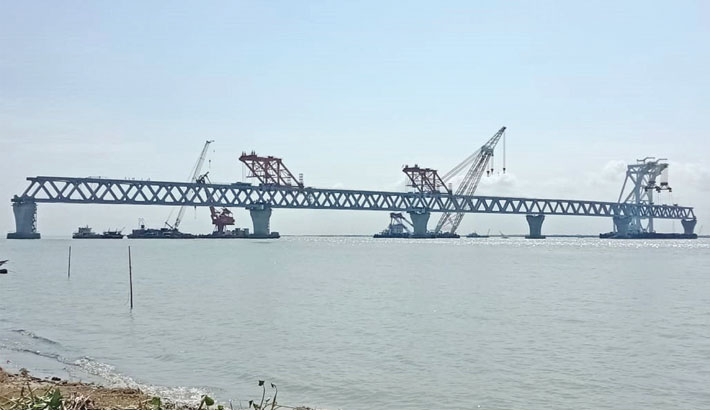 With the installation of 34th span on Sunday, over a five-kilometreof the giant Padma Bridge is now visible.

The ‘2E’span, weighing 3,150 tonnes, was installed on pillars No. 7 and No. 8 at Mawa point in the morning, said Executive Engineer (Bridge) Dewan Md Abdul Quader.

Earlier around 4:15 on Saturday, the world's largest floating crane, Tian-e, carried the span from a construction yard in Mawa in Louhajang upazila of Munshiganj.

After about 30 minutes, the crane with a capacity of 3,600 tons reached the pillars.

Then the crane anchored the bay and the span was lifted. The span was placed on Sunday as the installment was delayed due to inclement weather.

With the 34th span being installed, only seven more remains. The construction of the 6.15km long two-storey Padma Bridge began in December 2014.

Over 80% of the bridge construction has been completed so far.

As of September 30, Tk23,796.24 crore has been spent on the project and the authorities currently estimate that the total cost would reach Tk30,193.39 crore.

Sinohydro Corporation of China has been given the work of two of the five major components of the project, including river training work while China Major Bridge Engineering Construction Company was awarded the contract for constructing the main bridge.

Last week, the 33rd span out of 41 of the Padma Multipurpose Bridge was installed.

Three spans were installed over the bridge in the current month.

Besides, the 35th span will be installed on No. 2 and No. 3 pillar on October 30 and the authorities concerned have set a target to install all the spans within December.

The construction work of Padma Bridge started in 2014.

The authorities expect to complete the work of the multipurpose bridge within 2021.

On January 20, Road Transport and Bridges Minister Obaidul Quader said the bridge will be open to traffic by 2021.

Once in operation, the Padma Bridge, Bangladesh’s largest infrastructure project till date, will connect 21 southern districts with the capital and is expected to boost the GDP by 1 percent.