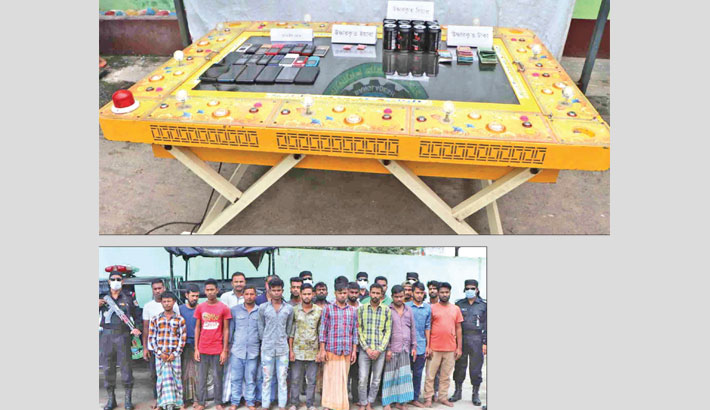 (Top) RAB personnel seize an electronic casino game board, playing cards, yaba tablets, foreign beer, mobile phone sets and cash during a drive at a mini casino club at Ashulia on the outskirts of the city on Saturday night. (Bottom), the elite force arrests 21 gamblers during the drive. - SUN photo

Law enforcers busted a mini-casino club and arrested 21 gamblers at Ashulia on the outskirts of the capital on Saturday night.

The casino club was run in guise of carom game.

RAB-4 Commanding Officer Mozammel Haque provided the information at a press briefing at its head office in Mirpur-1 of the capital on Sunday.

On information, a team of the elite force, led by RAB Executive Magistrate Anisur Rahman and Senior ASP Sajedul Islam, conducted a drive at the casino house at Kaichabari in Baipail, Mozammel said.

He also said that the crime-busting force seized a casino electric board, a huge number of playing cards, 100 Yaba tablets, 12 cans of foreign beer, 22 mobile phone sets and Tk 38,000 in cash from the casino club.

The CO of the force unit said that the main owners of the casino club —Plabon Hossain, Ismail and Omar Faruk -- went into hiding.

The force was trying to arrest them, he said, adding that more information could be collected after their arrest.

According to the officer, the electric casino board was brought from Malaysia.  And the club had been run for the last one and a half years.

The officer said that gambling of Tk 10 lakh to 15 lakh was played there every night.

The officer further said that mostly lower-income groups came to play at the casino house and lost their everyday earnings through gambling.

The force will try to find out those involved in bringing the casino board. A case was underway against them, he said.