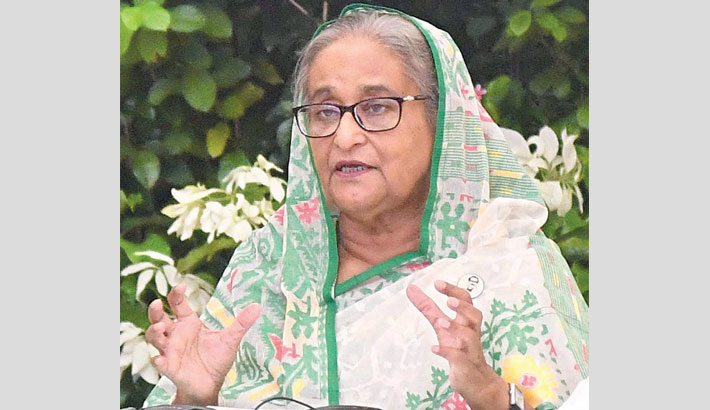 Prime Minister Sheikh Hasina on Sunday called upon the journalists to refrain from writing any reports that can mislead the nation and create division among the people.

“Do not write any reports that can create division in the society or mislead the people towards wrong direction. I request you to pay special attention to this matter,” she said.

Sheikh Hasina made the call while virtually inaugurating the silver jubilee celebrations of Dhaka Reporters Unity (DRU) from her official Ganabhaban residence.

The premier also appreciated journalists for their objective reports that guided the government to take prompt measures against any sort of injustice.

“Reports (in the media) help us a lot. By reading reports in the newspapers, we stand by the helpless people and take tough action against the wrongdoers,” she said, urging the journalists to work with responsibility and patriotism for the welfare of the people.

Noting that her government firmly believes in the freedom of press and has done whatever necessary in this regard, she urged the journalists to make constructive criticism that will help the government efforts to build Bangladesh into a developed and prosperous country free from hunger and poverty as dreamt by the Father of the Nation.

Sheikh Hasina, also the president of the ruling Awami League, reiterated her government’s strong stance against corruption, terrorism and militancy, saying that those involved in these social menaces are now given punishment as per law.

“We always think [about taking action] whenever there is any corruption or injustice. We have to take steps against corrupt people, no matter who they are,” she said.

Reminiscing about the activities of the past governments, the premier said there was a time when it was a normal phenomenon to suppress corruption, but the Awami League government never does that.

“When any news or information comes out about any corruption or unjust activities, we never think whether our party is involved in this, or it will bring bad name for the party or the government…we never think about that,” she said.

Sheikh said her government thinks of taking action against corruption or unjust, whenever it happens.

“With doing this, sometimes it may look like the Awami League government is committing all the corruption. This is not true. The seed of corruption was planted by the governments that came to power illegally after August 1975,” she said.

Referring to Ziaur Rahman, HM Ershad and Khaleda Zia, the premier said they not only nurtured corruption but were also involved in this social menace.

“Assuming power, the Awami League government never ever did that. Whenever we find any corruption, we are taking action immediately thinking little about who the person is or how big post that person holds in the party or whatever,” she said.

Due to this stern stance of the government, she said, the opposition has got no scope to write against it and dare to say that Awami League is involved in malpractice.

Sheikh Hasina said the government is also maintaining its zero tolerance against terrorism and militancy.

“We’re firmly against terrorism and militancy. We’ve tackled the Holey Artisan incident in just 48 hours though many had thought Bangladesh alone wouldn’t be able to handle it,” she said.

The premier said the government created awareness among the mass people as it is not possible to achieve something without support from the general people.