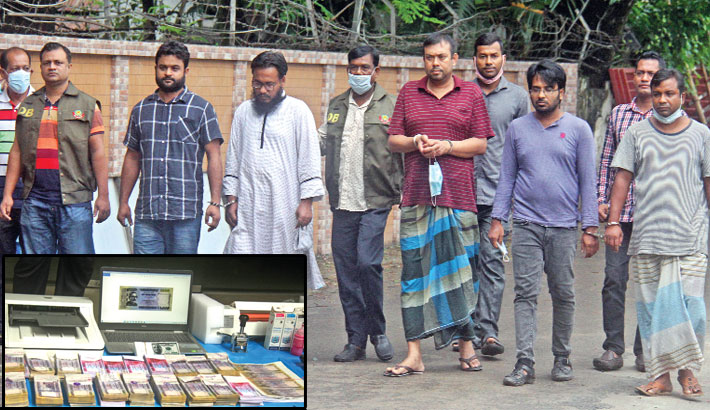 Police produce six suspected members of a currency counterfeiting gang, including the ringleader, before journalists after arresting them in the capital’s Adabar area on Saturday. Inset, counterfeit currencies, machines and materials to produce counterfeit notes were seized during the drive. — SUN PHOTO

Detectives arrested six members of a fake currency makers’ gang along with counterfeit US dollars, taka and fake note manufacturing tools from Adabar area in the capital on Friday.

The DB team seized counterfeit US dollars worth $11,300, fake notes worth Tk 5,857,000, various fake note making materials and a car from their possession.

AKM Hafiz Akter, Additional Commissioner of Police in the Detective Branch (DB), said that the arrestees have been manufacturing fake notes for the last five to six years and then passing them to their associates.

“This ring is experienced in making fake notes of US dollars and no one can guess that these are fake ones,” Hafiz Akter said.