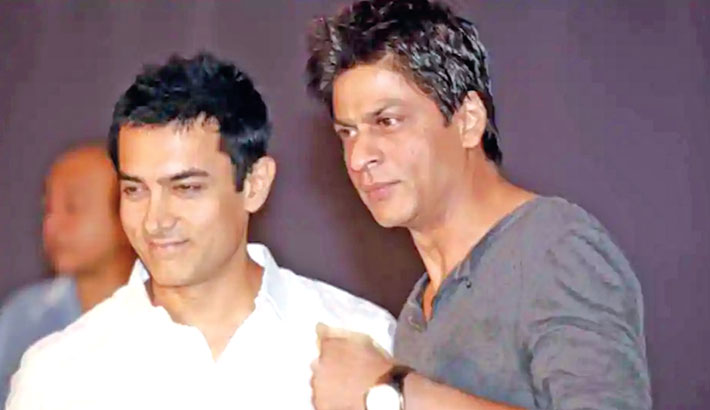 All the three biggest Khans of Bollywood--Salman, Shah Rukh and Aamir--share an amicable relationship these days. They extend support for their latest releases and life events and even make cameos in each other’s movies. However, things may not always have been 100% chill between them,reports Hindustan Times.

In 2004, Shah Rukh and Kajol opened the first season of Koffee With Karan. On the show, Karan Johar asked them both a series of questions in the rapid fire round. One of the questions was what would Shah Rukh tell Aamir’s fans. Shah Rukh had replied, “Guys, you got to find an icon that you can look up to.” Both Kajol and Karan had laughed at Shah Rukh’s reply but no one asked him the reason behind it. When asked what he would tell the fans of Salman Khan, he said, “God bless you.”

In 2008, there were more rumours of a rift between the two when Aamir made an infamous comment about Shah Rukh on his blog. Aamir has written about an afternoon at his farmhouse where there was a dog called Shahrukh. “I’m sitting under a tree, on the edge of a valley, approximately 5000 feet above sea level... Ammi, Ira and Junaid are by my side and we are in the middle of one of our favourite board games. Shahrukh is licking my feet and I am feeding him biscuits every now and then. What more can I ask for?,” he had written in the blog. The comment earned him a lot of flak from Shah Rukh’s fans.

Later, Aamir was asked about the same on Aap Ki Adalat when he said that he wrote the blog piece in the hope that even Shah Rukh would laugh at it. And Shah Rukh indeed did not mind the joke. “I have never bothered about it because I also say a lot of things in fun and I think I am also may be stressing somebody else out. I don’t get stressed when friends pass comments like this. Actually I enjoyed it,” Shah Rukh had told PTI.

However, there is no bad blood between the two at all now. Earlier this week, Aamir had written a beautiful post about Shah Rukh’s film Dilwale Dulhaniya Le Jayenge as it completed 25 years. “A hero who discovers his conscience, a heroine who finds her voice, a villain who has a change of heart, DDLJ appealed to the kinder, nicer, higher self within all of us. 25 years of a film that continues to charm the world. Thank you Adi, Kajol, Shahrukh, and the entire team of DDLJ,” Aamir wrote in his tweet.