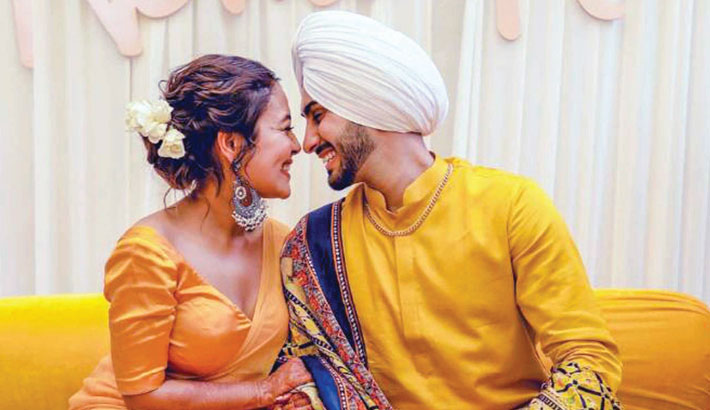 Singer Neha Kakkar tied the knot with singer Rohanpreet Singh in a traditional Anand Karaj ceremony in Delhi on Saturday . The wedding ceremony was attended by the couple’s close friends and family. The newlyweds will be heading to Punjab for a grand reception after the wedding,reports Indian Express.

Ahead of the main ceremony, the couple had a great time at their pre-wedding festivities. The photos from their haldi ceremony were shared by Neha on her official Instagram account. She captioned them, “#NehuPreet Ki Haldi Ceremony! @rohanpreetsingh” The couple looked adorable in the love-soaked pictures.

Neha announced her relationship with Rohanpreet on October 9 as she posted a photo with him. She captioned the photo, “You’re Mine @rohanpreetsingh” Sharing an identical photo, Rohanpreet also expressed her love for the Bollywood singer. “Meet My Zindagi! @nehakakkar” he wrote on Instagram. Since then, the couple has been sharing several pictures together on social media. The video of their Roka ceremony also grabbed a lot of attention.

Fans of Neha and Rohanpreet got to catch a glimpse of their chemistry in the recently released song titled “Nehu Da Vyah”. The song is written, composed and sung by Neha. Some portions have vocals by Rohanpreet as well.