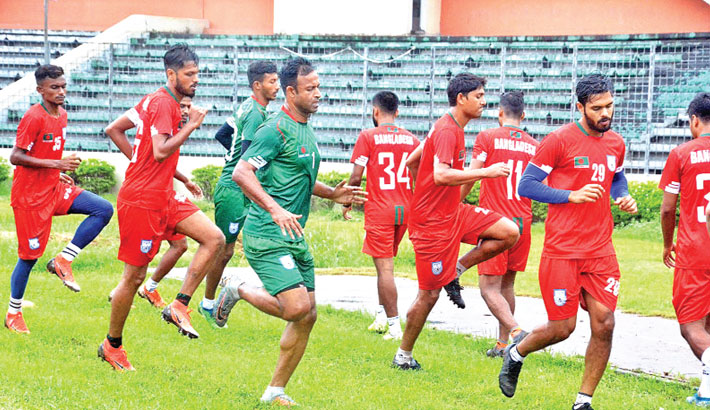 Bangladesh National Football Team players stretch during a practice session at the Bangabandhu National Stadium in the capital on Saturday, ahead of their FIFA tier-1 international friendlies against Nepal, scheduled to be held at the same venue on November 13 and 17 respectively. – BFF Photo

Bangladesh National Football Team returned on the pitch after a long layoff, will have less than three weeks to get ready for their first international games in the post-pandemic season. Bangladesh Football Federation (BFF) decided to return to football with two FIFA tier-1 international friendlies between Bangladesh and Nepal, scheduled to be held at the Bangabandhu National Stadium (BNS) in the capital on November 13 and 17 respectively.

Ahead of the matches, BFF announced a preliminary squad of 36-member last Tuesday.

Head coach Jamie Day believes that the home side have a chance against Nepal, if they would prepare well within 20 days. The coach also emphasised that his main assignment would be to prepare the entire team in the best possible shape for both games in the time frame.

“Both teams are going to be very similar in terms of fitness because preparation time is the same for both sides. Maybe who prepares best in a short time and is injury-free, the best team in 20 days will get results. It’s not about just winning but about ready and prepared to play football... My job in 20 days to get them in the best possible shape for both games in the time frame,” Jamie earlier told the reporters.

However, the first batch of the team including four officials and 14 booters joined the camp with their COVID-19 reports on Friday. The booters underwent the Cooper test on the first day of practice at BNS on Saturday. Team’s physio Fuad Hasan Hawlader said they got satisfactory scores from footballers in the first phase of the test.

“When players get an interval, we provide them some sessions to maintain fitness level. In the Cooper test, we mainly check their fitness level, speed, stamina. Our players returned to the field after a long break, we checked their fitness level in the Cooper test today (Saturday). It was the first phase of the test. We got satisfactory scores from them. All of the 14 footballers achieved the target set by us. However, we’ll do some more tests and will give the final marks on their fitness summarising all test scores,” Fuad told reporters after the day’s session.

After the day’s session, defender Rahmat Mia said, “The good thing is that we have finally started our practices. We practiced at home during the lockdown, later we started to go to the gym. They (coaching staff) told us not to take too much pressure on the first day so that we won't be injured. We need to keep ourselves fit and injury-free. We know we don't have much time. We individually did practices during the break, now we’ve started the camp. All the players are excited. We’re trying hard to do something good in the coming days.”

Forward Saad Uddin said, “We didn’t face much trouble today (Saturday) as we had been practicing during the break. Our target is to perform well against Nepal. We have conceded defeats against Nepal in the last two matches, now it is our turn. But it's tough to prepare ourselves within a short time. We practiced individually, now we are starting a group practice. If everyone gives equally, we can expect something good.”

However, the rest of the team members will join the camp in several phases. Mamunul Islam Mamun, Arifur Rahman and Nabib Newaj Ziban are waiting for their COVID-19 test reports while Tutul Hosain Badsha and Sahidul Alam will join the squad on October 27.