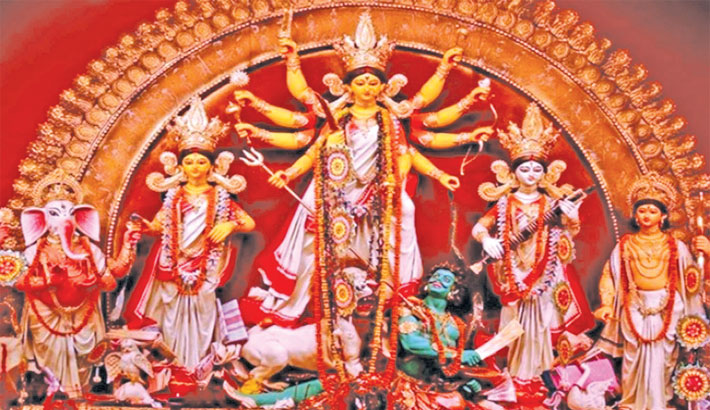 Unquestionably autumnal Durga Puja is the biggest festival of Bengalee Hindus all over the world. Throughout the year they wait for this festival, but due to corona pandemic this year is totally different. Devastating corona virus has severely affected social, cultural and religious festivals across the world, but amid such terrible situation Durga Puja has arrived, according to the natural flow of time. Though in a different way, the festival-loving people are prepared to receive Goddess Durga within this challenging atmosphere when quarantine, sanitiser, hand wash, social distance, wearing mask are very familiar to all.

Durga Puja is celebrated in three stages - mahalaya, bodhon (invocation) and sandhipuja. Normally, formalities of Durga Puja begins just after seven days of mahalaya, but this year is not similar to earlier years. Scheduled date of mahalaya was 16th September (1st Aswin) but as per Bengali almanac Aswin of this year is evil month. Due to two new moons in a single month, the goddess can not be worshipped in this Aswin. Worship will be held in Kartik and Goddess Durga will come to earth after 35 (instead of 15) days of mahalaya. According to Hindu tradition, Durga Puja usually continues from the 6th to 10th tithi (lunar day) of bright fortnight in the month of Aswin, sometimes in early Kartik.

Theological aspects of Durga Puja are traditionally observed, but due to the pandemic, the celebration will take a different shape. Due to unusual situation, massive change has occurred in preparation and observation of recent festivals like Eid, Muharram, Rathjatra and Janmastami etc. Many safety measures are to be taken during the days of Durga Puja. The Central Committee of Bangladesh Puja Celebration Council has already circulated some instructions for celebrating this festival which are mainly—

4.            Visitors, devotees and priests must wear masks and maintain a physical distance of at least three feet.

10. Only devotional music will be played.

11. To avoid noise, loud speaker will not be used. However, dhak-dhol-kasar can be used,

14. Not to stay inside temple /pandal for a long time,

21. Unwanted situation and any accident should be reported to concerned police station instantly. If necessary 999 is to be contacted,

22. Procession for immersion of idol should be avoided and some others.

Due to corona pandemic and financial crisis budget and pomp of Durga Puja has been curtailed in many places. The height of idols has been reduced in Kolkata. There was always a competition among the organisers to build high idols, even 22 feet, to attract people, but this year the height of idols has been reduced to 7- 9 feet, maximum 14. Mythologist Professor Nrisinghaprasad Bhaduri has opined that the height of idol has not been prescribed in mythology. Idol of 8-9 feet is sufficient. The height  of idol is  not devotion, but wastage of money. Economists think that along with height incidental expenses also increase, but some people get temporary employment. Some organisers explain the matter philosophically that the height matters nothing because mother is coming and that is all.

With 801 idols Durga Puja of Shikder House in Bagerhat is acknowledged as the biggest one in the world. Shikder family introduced the large scale Durga Puja in 2011 to make aware the society and the whole world of the traditional religion and importance of worshiping gods and goddesses. Under changed circumstances this heavyweight Durga Puja has been suspended. If idols are made then millions of domestic and foreign visitors will flock and it will not be possible to maintain physical distance and health rules. So, they have decided just to worship without the festival which is certainly a very realistic initiative.

Historically, Raja Kangsha Narayan of Taherpur (Bagrmara, Rajshahi) introduced autumnal Durga Puja in Bengal in late 1500s. Goddess Durga is habituated to be worshipped with colourful decoration and pompous adoration, but since inception she has never seen such a disastrous and depressed situation. This is a new experience for Goddess Durga, but she is just a helpless onlooker. Durga Puja means rush of crowd to visit Goddess Durga in many shapes and themes in different temples/pendals. Mamata Banerjee, the Chief Minister of Paschimbanga, has appealed to people to enjoy Durga Puja staying at home, but is it at all possible? Physicians there apprehend that Corona Tsunami may occur if crowd is not controlled, A public interest case was filed at Kolkata High Court seeking court’s intervention in crowd control. The High Court has declared every mandap/temple of West Bengal a Containment Zone or No Entry Zone. The ruling of 19th October 2020 banned visitors’ entry into any mandap/temple. Goddess Durga will have to remain locked inside. No such decision has been taken in Bangladesh, but it is established that if the crowd is not controlled, corona infection cannot be stopped. Our honourable prime minister has reasonably requested people to wear mask in crowded places. We should remember that mask is a must even for a devotee because virus does not spare anyone.

A main part of Durga Puja is Kumari Puja (worshipping a teenage girl as Durga). Kumari Puja of Belur Moth (Howrah, Paschimbanga) is famous, but unprecedentedly in this year the nominated baby girl and her family members will be tested. Only on negative report the virgin mother will be worshiped. Worshipper monks will also be tested. The programme will be visible on live streaming. No Kumari Puja will be held in Bangladesh this year. Durga Puja of 2020 is initially delayed, unusually different and extremely depressed. Goddess Durga is believed to have many shapes – mother, power, knowledge, peace etc. As an embodiment of power and victory of good against evil Goddess Durga is known as Mahisasurmardini (killer of Buffalo Demon) by her devotees. The world is now attacked by Coronasur (Corona Demon). Agnostics or non-believers may naturally raise question – can ten armed Mahisasurmardini prove her might as Coronasurmardini in this year?