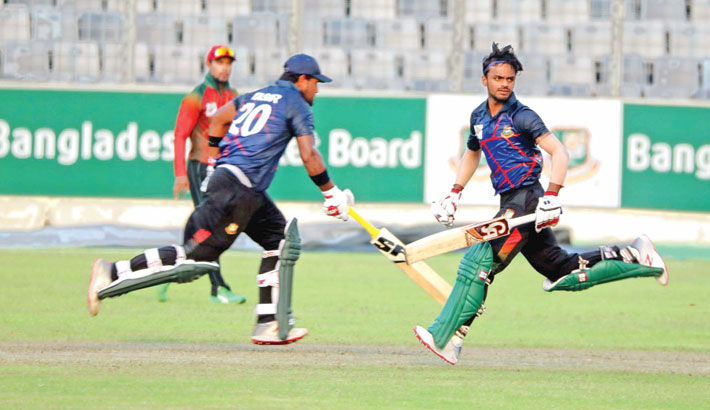 Yasir Ali and Mahidul Islam smashed a half ton each that lead Tamim XI to score 221-8 against Mahmudullah XI in the fifth match of the BCB President’s Cup at SBNS here on Monday. —BCB PHOTO

Tamim won the toss and decided to bat first and it back fired as they were struggling at 17-4 at one stage before Yasir and Nahidul added 111 runs for the fifth wicket to resurrect the ship. Yasir made 62 runs while Nahidul scored 57 runs and in the end Saifuddin came up with a cameo making 29-ball 38.

Pacer Rubel picked four scalps to remain at the top of the wicket tally with 10 wickets. Mahmudullah XI was in cornered situation after losing two in their three matches. They started the tournament with a four-wicket defeat to Nazmul XI before bouncing back in style, beating Tamim XI by five wickets.

However they were crushed by Nazmul XI in return leg match by 131 runs, a defeat that also spoiled the condition of their run rate. A win in the match would help Tamim XI seal the final straightway while a defeat would ruin Mahmudullah XI’s aspiration.