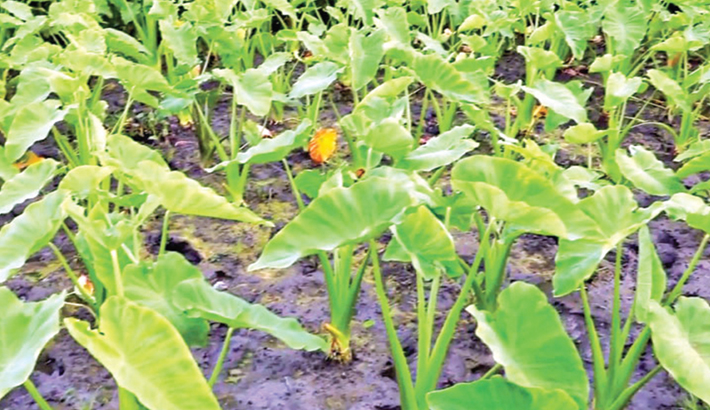 SIRAJGANJ: Farmers, especially the landless and the marginal ones, are becoming self-reliant by producing arum on sandy char lands beside the Jamuna River under Sadar and Kazipur upazilas of the district.

The good arum harvest has been attributed to suitable soil, favourable weather and necessary help from the local agriculture offices.

Different varieties of arum (kochu) including mukhi kochu, pani kochu, BARI pani kochu-1, 2, 3, 4 and 5 and panchmukhi kochu, were cultivated on 1250 hectares of land in the district this year and the yield is 20,555 tonnes, said Mohammad Jerin Ahamed, Agriculture Officer of Chauhali upazila.

Since the char areas are in remote places, so the growers carry the produce by using bull-drawn carts and sell those at different markets of the district. Once arum had no market value, but now the situation becomes totally different since per piece is now selling at Tk 30 to 35 in local markets.

The production rate of pani kochu was 12.25 tonnes per hectare of land, panchamukhi kochu 30.15 tonnes and mukhi kochu 25.92 tonnes, he added.

There is a variety of BARI pani kochu-1, which is popularly known as lotiraj, said upazila agriculture officer.

A few ordinary varieties of kochu including maan kochu and faan kochu are also gown in small amount of lands, said agriculture officials.

Full grown arum plants in a large field at Ratankandi village in Sirajganj Sadar Upazila. They cultivate it during the beginning of the Bengali month Baishakh and harvest during late Ashwin. Hyacinth and organic fertilisers are good for its better production. From each hectare, around five or six tonnes of arum is available, informed concerned sources. Around 25 to 30 hectares of char lands under the two upazilas have been brought under arum cultivation this year, the sources confirmed.

Rafique Miah of Char Ratankandi village under Kazipur upazila said, “Farmers have been cultivating arum for long, but due to low price, they were not much interested. But, now the farmers are cultivating arum extensively since they are getting fair prices. The production cost of per piece arum is around Tk 10, while the same is sold at Tk 25 to 35 in local markets.”

He further said, “Many families cook arum with meat or fish and serve the dish to guests, especially bridegrooms. The arum which is produced here is mostly sent to Dhaka and other big cities after meeting local demands.”

Motiur Rahman of Sonamukhi village under the same upazila said, “The char farmers are doing brisk business by cultivating arum. So, its cultivation is increasing day by day. But, due to substandard communication system, the farmers are being compelled to sell their produce at throwaway prices locally. If government provides support, its cultivation may increase contributing to the country’s economy.”

Chauhali Upazila Nirbahi Officer (UNO) Afsana Yeasmin said, “The arum cultivation is spreading fast in char areas here. During the previous ten years its cultivation was not remarkable, but this season around 80 hectares of land have been brought under the cultivation. Our agriculture officers are providing advices to the farmers. We are ready to provide all kinds of support if necessary.”

This vegetable is in high demand as it is tastier and more nourishing than all other vegetables.

The vegetable is rich in vitamins and calcium which can prevent different diseases in human body, Dr Kadir added.