A bouquet of natural painkillers 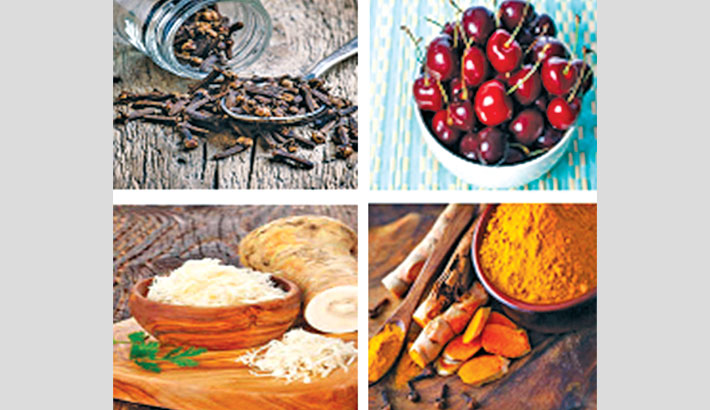 Ways of using horseradish for sinus:

•Holding half teaspoon of freshly grated horseradish root in mouth for several minutes. It helps to cut the mucus in the sinuses as well as allowing them to drain down the throat.

•HSolding your head over a bowl containing fresh or grated horseradish in collaboration with cups of hot water. (Make sure that you have closed your eyes while inhaling the steam from the dish).

Blueberries on urinary tract infection: Urinary tract infection is a severe issue which affects as many as 50 percent of all women in their lifetime. According to a study published in “The New England Journal of Medicine” blueberries are rich in Proanthocyanidins which is responsible for the prevention of bacteria from sticking to the walls of the urinary tract. Anthocyanins are extensively studied for their health properties. It improves heart health as well as attacks cancer causing elements, according to a study from the University of Illinois which highlights on the effects of blueberries on prostate cancer. Due to the presence of Anthocyanins, blueberries show anti-bacterial activity against urinary tract infection. Not only because of the antibacterial properly, but also their antioxidant capacity make blueberries unique.

•Treat the infection or the pain of the infection with blueberry juice. In a study led by Robert Krikorian along with his team at the University of Cincinnati it had been found by the researchers that older adults who were given blueberry juice scored higher on memory tests.

Cherries on joint pain: Cherries have antioxidant and antiviral properties to boost up immunity and to fight infection. Cherries can take a good care of joint pain sufferers not only with its sweetness but also with a promise to reduce the pain. Ginger and Turmeric on chronic pain: The collaboration of ginger and turmeric has proved to relieve chronic pain because of the presence of curcumin which specifically functions to decrease chronic pain associated with arthritis. Many patients who pass their days under the prescribed medications to relieve symptoms of chronic pain have become sufferers of side effects such as cardiovascular and gastrointestinal complications. Conversely, taking herbal therapies of turmeric and ginger make an effective way to supplement those medications. Studies on the patients diagnosed with osteoarthritis have seen improvement in pain after being treated with the herbal therapy. Let’s not worry for the chronic pain that upsets your mind when you have raw ginger and turmeric beside you.

Apple Cider vinegar on heartburn: If you’re a sufferer of the burning feeling in your chest caused by acid reflux, then apple cider vinegar might be a ticket to your recovery. Apple cider vinegar is rich in enzymes, pectins and protein. On a special note, there is a recommendation of taking apple cider vinegar pills that are packed of healthy amino acids and antioxidants rather than the liquid form of ACV.

Garlic on earache: Garlic is considered as a natural remedy due to the presence of a specific compound ‘Alicin’ which helps to fight infections that may cause earache. With the consumption of raw garlic, it is possible to decrease the pain of earache.

I would like to end this article hoping that you all will stay connected with these natural pain killers.