Ahamed Ullah, back from Bhasan Char 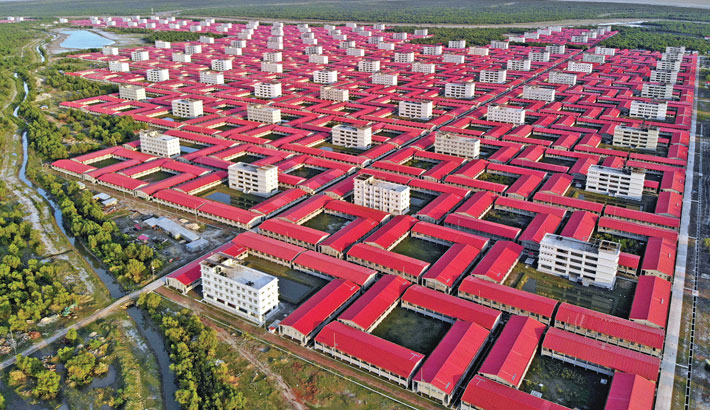 Houses built in Bhasan Char of Noakhali district are now ready to accommodate around one lakh Rohingyas, just a fraction of over one million people who have fled waves of violent persecution in their native Myanmar. The photo was taken on Saturday. —sun Photo

Bhasan Char is completely ready for temporary relocation of a section of Forcibly Displaced Myanmar Nationals (FDMNs) or Rohingya people – a rehabilitation facility that will ease the pressure on the Cox’s Bazar Rohingya camps where the displaced people are currently abiding in.

The remote char has radically been changed in just two years. Once a habitat of a few trees and buffaloes, the shoal areas have been transformed into a new town while the credit goes to Bangladesh Navy.

All the development project at Bhasan Char at a cost of around Tk3,095 crore has been completed. Now one lakh Rohingyas is likely to move there at any time.

A total of 1,440 cluster houses, 120 shelter houses and four-storey building have already been set up in the new abode for the purpose of relocation of the displaced Rohingyas. These cluster houses have been built in the style of cluster villages.

There are a total of 12 houses in each cluster. Each house has 16 rooms, and each room can accommodate four people. Each house is 3.9 square metre built in accordance with the standard set by the United Nations High Commissioner for Refugees (UNHCR).

The houses of the Rohingya camp in Cox’s Bazar are surrounded by bamboo and triplets which are vulnerable to natural disaster. On the other hand, the houses in Bhasan Char are standard cluster houses.

The water level in Cox’s Bazar is falling day by day due to its overuse by some 11 lakh Rohingyas. But Bhasan Char has ponds, lakes and canals in addition to groundwater.

The food storage and supply system are also much better in Bhasan Char than that in Cox’s Bazar. While most areas of the Rohingya camp in Cox’s Bazar are dark, Bhasan Char has diesel generator and solar power systems.

In a word, there are more security and facilities for Rohingyas in Bhasan Char of Noakhali than those in Cox’s Bazar.

While visiting Bhasan Char on Thursday, it was seen that it is 100 percent ready for the life and livelihood of about one lakh Rohingyas. Almost all the elements have been kept here for safe accommodation and comfortable living.

Residential buildings, markets, hospitals, clinics, police stations, offices and shelter houses have been constructed. Besides, there are various opportunities of making livelihood.

Measures have been taken to ensure the long-lasting stability of this huge work of Bhasan Char located in Char Ishwar Union of Hatiya Upazila of Noakhali. Work is under way to stop the inland water vessels for regular travel.

There is a total of 120 such shelter houses in Bhasan Char which will remain intact even in storms of 260km speed. Some 1,000 people and 200 cattle will be able to take shelter in the shelter houses. Commodore Abdullah Al Mamun Chowdhury, project director of Ashrayan-3 Project in Bhasan Char island, said, “Necessary steps have been taken to deal with the natural calamity at Bhasan Char, located 51.8km from Patenga Point, 24.5km from Hatiya and 8.3km from Sandwip.”

“For this, the data of all types of storms in the Bay of Bengal for 172 years has been analyzed. Besides, the nature of natural disasters in the region has been taken into consideration for 10,000 years,” he added.

An air-conditioned building has been constructed as the office and residence of the representatives of the United Nations and international organizations. There are separate buildings for Red Cross or Red Crescent representatives.

Another four-storey building houses offices and accommodation for RRRC and administration representatives. There is a multipurpose super shop in a building.

An aesthetic guest house has been made for important guests. In addition, two security buildings are being used for Navy officers and sailors.

A 42km paved and herringbone road has been constructed to travel inside the project area. There are two self-contained helipads.

While visiting the clusters, it was seen that Bhasan Char has to rely on the electricity generated by solar and generator systems as there is no direct power line. So, the living rooms for Rohingyas have been designed in such a way that the free movement of natural air can be ensured. As a result, fans will not be needed in the rooms.

In Bhasan Char, about three thousand stoves have been installed in the kitchens for the cooking by the Rohingyas. One lakh people will need 1,125 tons of fuel per month. If wood is used as this fuel, there is a fear of deforestation in the vicinity. So, charcoal is being used as fuel. Besides, 250 biogas plants have been set up.

Bhasan Char has food storage facilities for three months at a time. At the same time, four huge ware houses of 205 feet length have been constructed to store relief materials.

There has also been afforestation in the coastal areas from the dam. In order to prevent slow erosion, three level protection measures—including wave screen piling, gravel installation and geo bag—have been taken up at a distance of 400 to 500 meters. Besides, according to RDPP, work to increase the height of the dam from 9 feet to 19 feet has started from last January, he added.

Project Director Commodore Mamun said although Bhasan Char has a total area of 13,000 acres, only 1,700 acres of land have been dammed and 432 acres of housing and other facilities have been built. Some 352 acres of land are earmarked for the Navy’s Forward Base. Another 932 acres have been left vacant for future expansion.

Sources said about 14,000 – 15,000 workers have worked for the project area for two years. In order to speed up the construction work, 30 contractors have worked under 30 different packages.

Approximately, 200 members of the Navy and engineers supervised the construction work. MDM Architects, a UK-based company, has acted as a consultant for implementation of Bhasan Char project.

In addition, HR Wallingford, a British company, has worked as a consultant on coastal and dam morphology.

At present, Rohingyas do not have any economic plan as they get food and rations under the relief aid card. But Bhasan Char has arrangements for experimental livelihood and other economic activities.

There are now about six thousand buffaloes at the island. In addition to these privately run buffaloes, dairy products can be produced from buffalo milk through the government projects. Now that the experimental initiative of goat and sheep rearing is going on.

The project has also been successful in experimental fish farming in two huge lakes. Apart from this, the people involved in the project think that it is possible to take initiative of any small and cottage industry on the huge vacant land.