A flower born to blush unseen 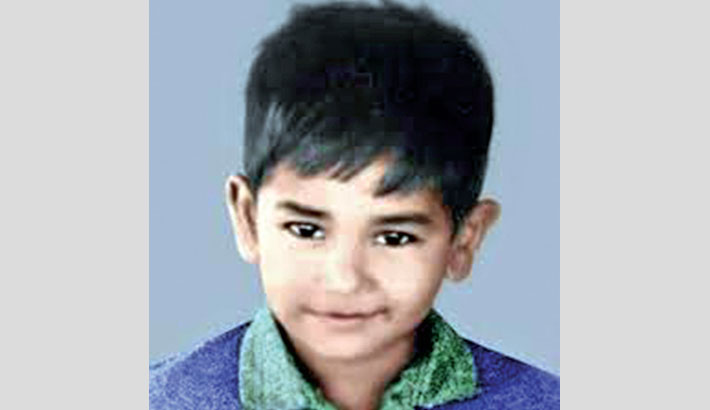 The killing of Sheikh Russell is one of the cruelest examples of infanticide in human history. It is a tragedy within a tragedy. The brutal massacre that happened on the fateful August 15 night in 1975 has led to the national tragedy of Bangladesh. The assassination of the founding Father of the Nation, Bangabandhu Sheikh Mujibur Rahman, and the murders of his family members are a tragic loss of life we are deeply shocked and saddened by. But the terrible killing of the 12-year old boy-- Sheikh Russell is the most shocking of all that took place on that ominous black night. Losing Russell is still the country’s worst nightmare. It keeps weighing heavily on the hearts and minds of people from generation to generation.

Sheikh Russell is the youngest of five children of Sheikh Mujib. He must have been 56 if he is still alive. And as per normal process, he was supposed to stay alive. The way his elder sister Sheikh Hasina is carrying out the political and ideological legacies of Bangabandhu as his daughter and heir and is becoming instrumental in realising his dream of a Sonar Bangla, Russell also could have contributed to it standing beside her. But he could not survive the notorious coup d’état and made such a quick exit from the stage of life that the great potential went up in a puff of smoke. This however, did not happen as a matter of course. Russell was not allowed to live as part of a conspiracy. The conspirator’s plot made his life grind to a halt. As the last independent Nawab of Bengal, Siraj ud-Daulah fell victim to an Indo-British conspiracy in the battle of Plassey, so did Bangabandhu Sheikh Mujibur Rahman. He fell prey to a devilish conspiracy hatched by the anti-liberation forces and was killed in his own sweet place at Dhanmondi-32. A sudden gust of wind blew out the smallest flame of the Mujib lighthouse called Sheikh Russell. Russell was a small bud swept away by a mighty northwester, a violent thunderstorm. He was an unblossomed rose which could have spread delicate fragrance after blooming. But a cruel gardener had plucked it and trampled all over. There is always a tinge of sadness when it comes to remembering Russell. Even his birthday turns into a day of mourning and we suffer agonies of guilt over what happened to the infant boy.

Sheikh Russell was the youngest affectionate son of Bangabandhu. Bangabandhu gave him the name ‘Russell’ after the name of his favourite philosopher Bertrand Russell. In those days Russell was a name to conjure with. Bangabandhu himself was a diehard follower of Bertrand Russell and sure wanted his son to be imbued with his liberal humanist and rationalist philosophy. Bangabandhu used to read Russell’s text out to his wife at his leisure wishing his children would grow as freethinking as Russell was. After the death of Huseyn Shaheed Suhrawardy while Bangabandhu took the helm of Awami League in 1964 and was struggling to establish the party, Sheikh Russell was born. Two weeks before the election of 1964, Bangabandhu was sent to prison for alleged treason. Then happened a series of events which represent landmarks in the history of Bangladesh. The Six-Point Movement, the popular upsurge against the Pakistani military rule, the Agartala Conspiracy Case against Mujib and his resultant imprisonment, the popular uprising and mass movement of 1969, the general elections of 1970, the all-out non-cooperation, the Operation Searchlight on  25 March 1971, Mujib’s arrest and imprisonment in Pakistan and the nine-month long Liberation War---in all the historic events Russell remained separated from his father and was deprived of his affection. A father who is to a son more valuable than the whole world remained a man of dreams to Russell during the long line of events. Bangabandhu himself could very well understand Russell’s pressing pang of missing his father. And hence, after assuming the responsibility of the newly independent country amid all duties and occupations, Bangabandhu would keep Russell close to his side—in the office, meeting, at the dining table and even on tour in foreign countries. Everywhere Russell was seen holding on tightly to his father. Maybe in the child’s mind there was always a fear of losing his father.

However, the fear came true in Russell’s life. That’s a terrible experience. Bangabandhu’s residential personal assistant A F M Mohitul Islam gave a candid statement of the 15 August night incidents. The heartbreaking description of Russell killing brings tears even to the devil’s eyes. While the killers brought Russell and the housemaid Ruma downstairs, the frightened child clung to Mohitul and asked, “Will they kill me too.” Mohitul reassured him that they would not do him any harm. Mohitul thought the killers could not be so cruel as to kill an infant and therefore would let him escape unhurt. But there was no milk of human kindness in those animals in human shape. Mohitul begged them to have pity on the minor boy but to no avail.  It was part of their conspiracy to wipe out all members of Mujib family. So Mohitul’s appeal fell on stony ground. In the pretext of being taken to his mother, Russell was taken to be killed. He was cringing in terror. In the final bid to save his life he knelt in supplication and implored, “For Allah’s sake, don’t kill me. My Hashu Apu is in Germany with my dulabhai (Brother-in-law). Please send me to them.” Deeply moved by Russell’s appeal a man on sentry duty hid him from the killers in the sentry-box. After about half an hour, a major caught sight of him, took him upstairs and shot him dead cold-bloodedly with his revolver. Meanwhile, the entire killing mission was over and done with. The noted nuclear scientist, Dr M A Wazed Miah, also gave a heart-rending description of Russell killing in his book.

Russell’s small world revolved around a few people i. e.  his parents --the Mujibs, his sisters-- Hashu Apu and Rehana Apu and brothers—Sheikh Kamal and Sheikh Jamal. Little Russell was the apple of everybody’s eye. He was all the world to them. Prime Minister Sheikh Hasina’s eyes still get moist with tears when she has a walk down memory lane and recollect Russell’s memories. She chokes back her sobs but feels blue in inexpressible sorrow over the premature death of Russell only at the age of twelve. The paramount leader of the country, leaving behind everything, becomes Russell’s Hashu Apa. It seems being Russell’s Hashu Apa is way more important to her than anything else even the premiership.

Russell’s Hashu Apa is now the Prime Minister of Bangladesh. She has assumed the responsibility of changing fortunes of her people. She succeeds in doing it and is enjoying the sweet smell of success and fame. But she has not been oblivious, not for a moment, to the harrowing fact of 1975, in which she lost her parents, her brothers, her little Russell—her world. Russell’s Hashu Apa has brought his killers to trial and to heavy sentence. The arrogant killers who once claimed responsibility for the crime in broad daylight were brought to their knees. Sheikh Hasina did this to try the avowed killers of the Father of the Nation and to establish the rule of law in the country. This is a tribute to sibling love and moral responsibility. It pacifies the victim’s soul on one hand and comfort his family, friends and the countrymen on the other. Russell is not only an infant son of Mujib. Through martyrdom he has assumed the power of the human spirit to fight the enemies of Bangladesh.  Russell was lost in the ominous August night, but he still exists in every household of Bangladesh.

Our reporter adds: Different socio-cultural organisations, including the associate bodies of the ruling Awami League, have taken various programmes to observe his birthday.

To mark the day, the AL will place wreaths at 8:00am at the graveyard of all martyrs, including Sheikh Russell.

Besides, recitation of fateha, milad and doa mahfil will also be arranged seeking eternal peace of the deceased.

Awami League general secretary and Road Transport and Bridges Minister Obaidul Quader in a statement has urged the party leaders, workers, supporters and people from all walks of life to observe the birthday of Sheikh Russell following health guidelines.