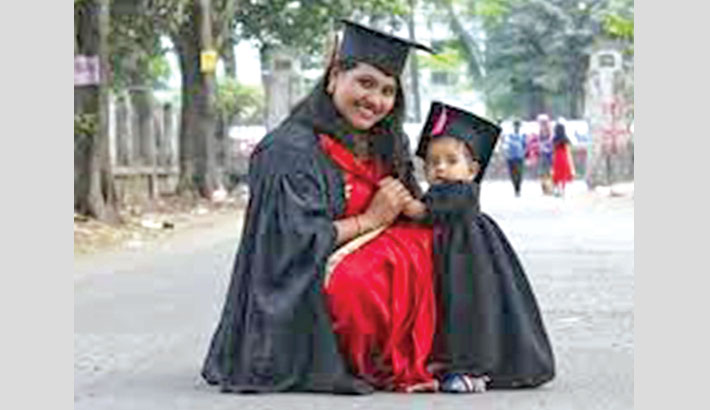 A graduate mother and her child — Photo: collected

Once I was in semester-final-examination invigilation duty at my university along with my female colleague. The colleague, indicating a female student, told me that she was pregnant and if she wanted to go to the washroom frequently I should let her go. I told that student that I will allow you to go as many times as you require and collect your answer script at the end of the collection of other examinees scripts. This incident worked as a catalyst to write something for the married female students of my institution. To shed more light on the topic, I took individual interviews with some students.

Besides, the stories of married female students doing tertiary degrees are mostly untold and unheard; and they are expected to go with the flow, that is, to concur with others even in the face of adversities. Studies show that the participation of female students in tertiary education is far better than that of our neighbouring countries. Though the figure is still inadequate in proportion to what it was supposed to be.

To begin with, married female students have to play multiple roles: as a student and a friend at the university, as a wife and a mom at home. Playing the roles in the respective arena, where they face constant difficulties, is not an easy task at all. As per the rules and regulations of the institution, they have to take part in the classes, appear in the exams, and perform all other activities. The life of a married female student is not a bed of roses because of the socio-cultural practices of our country, where the expenditure of female education is still considered to be a total waste. Furthermore, to bear the expenses of education, most of the female students are dependent on their husbands.

Gender discrimination, however, is the prominent factor which allows their male counterpart to enjoy more freedom in their activities. It is expected in the present patriarchal society that household chores are to be done solely by the female. For some students, pursuing higher education is a future investment for their self-identity beyond a homemaker. In this case, fewer students get support from their in-laws' side to begin or continue tertiary education after marriage. A married female student has to play multiple roles simultaneously, struggling with the harsh realities of a society where females’ prime responsibility is considered to be a good wife and an ideal mother. When it comes to talking about divergent roles, which include the role of a student, a friend with classmates, a wife, and a mother who has a child, they have to be an expert multi-tasking person.

Even, sometimes it also happens that husbands get annoyed with their wives for being late in preparing food for them due to the assigned tasks of the university let alone helping them in household activities. It becomes the most daunting task to make a balance between the two very different chapters of life, namely student life and conjugal life. To play a parallel role in the two distinct segments of life, the level of psychological stress and mental health need to be taken into consideration. However, they have to participate in the class as per the direction of the institution, at the same time they subconsciously keep thinking of the family affairs back at home which is extremely detrimental to their mental health.

For the socio-economic development of a country, there is no alternative to female education especially tertiary education. Napoleon rightly said, “Give me an educated mother, I shall promise you the birth of a civilized, educated nation.” There is no denying that the constructive development of a nation is greatly dependant on female education. As a result, concerned individuals should come forward to make a congenial environment for the higher education of the female. In this regard, mass consciousness is required from the root level where the campaign should be on positive sides of higher education of females and also regarding creating a level playing field for the female.

Household chores should be given recognition like other paid jobs to signify the endeavour of the women in society. In addition, the overall outlook of the patriarchal society should be changed through disseminating proper knowledge regarding the higher education of the female. As a consequence, the husbands would be supportive of both psychologically and functionally by helping their counterparts in household tasks rather than suffering from an inferiority complex. To give an instance, in western societies, almost all the family activities from preparing food to rearing children are done equally by couples. In our context, the stereotype thinking is the prime barrier for which tasks have been divided into a manly task and womanly task. Since their journey is not smooth, the teachers can play a vital role by being flexible in considering their issues to make them move forward. If we would like to build a happy, enriched nation, we should not ignore female education. To make this massive change happen, all of us need to work together from our own positions.

The writer is a lecturer, Department of English, Asian University of Bangladesh.