Digital Opportunity and Security for All 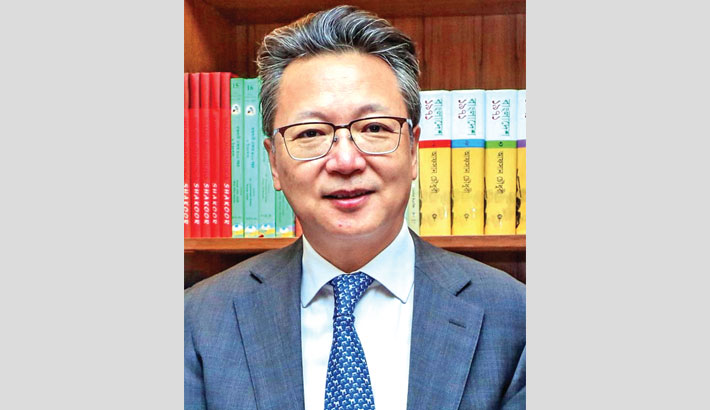 As the world is moving into an era of 5G telecommunications, in China, digital economy is booming with the number of Chinese netizens surpassing 900 million. A number of Chinese enterprises have emerged onto the global stage of ICT (information and communications technology) as main players with a perceivable competitive edge. It is at the same time that data security suddenly became a global concern as it is being placed under growing scrutiny from the national governments, albeit not always out of security concerns.

Nevertheless, data security is admittedly an important subject for discussion in the ever more digitized world. As new scientific and technological revolutions and industrial transformations are gaining momentum, global data is increasingly becoming an impetus for every country's economic development and industrial renewal. At the same time, data security threats are posing common challenges to global digital governance. So it is indispensable for all countries to strengthen communication, establish mutual trust, form close coordination, deepen cooperation, and have collective policy discussions to combat data security threats. And for that sake, Chinese State Councilor and Foreign Minister Wang Yi recently unveiled China’s "Global Data Security Initiative", which aims to “forge a community with a shared future in cyberspace featuring peace, security, openness, cooperation and order.”

A Rational Approach for All

The phenomenal development of information technology revolution and digital economy is transforming the way of production and life, exerting far-reaching influence over social and economic development of states, global governance system and human civilization. The explosive growth and aggregation of data, as a key element of digital technology, has played a crucial role in facilitating innovative development and reshaping people's life.

According to statistics, the number of mobile internet users has reached 3.5 billion globally, and the digital economy now makes up more than 15 percent of the global GDP. As it is, maintaining supply chain security of ICT products and services has never become more important for boosting user confidence, ensuring data security and promoting digital economy.

The development of digital technologies also leads to massive cross-border data flow, which puts to the test the governance capacity of national governments both technically and legally. On the other hand, as data laws and regulations differ among countries, the divergence has pushed up the compliance costs for global businesses and is vulnerable to exploitation, further driving up the existing deficit in governments’ digital governance capacity.

This is why, in order to address the deficit in global digital governance, China proposed the initiative on global data security based on mutual trust and multilateralism, with the aim to garner international consensus and provide a solution to data security risks.

Unfortunately there is also another side of the story, where data security is under growing regulatory scrutiny due to the rising geopolitical risks linked to the issue. Over the past months, the Trump administration, without providing any evidence, claimed Chinese high-tech firms and their apps, such as Huawei Technologies, ByteDance's TikTok and Tencent's WeChat, could pose national security risks because of their access to Americans' personal data.

While data security threat is out there for every country, the blind politicization of security issues as a weapon to crack down on other countries' high-tech companies will only hurt investor confidence in the global digital industry and undermine globally-recognized rules and practices. Without a transparent, reliable and regulated environment, countries will turn into isolated islands of data, stalling the progress of the digital age.

But this doesn't necessarily mean that data security is not important. On the contrary, the fast development in global digitization has been achieved under the guarantee of data security, only in a rational and pragmatic way.

Take China's initiative as an example. It calls for governments to tighten data privacy laws and carry out cooperation over cyber-security issues like encryption, which better protects each country's data security while avoiding political discrimination toward companies, wherever they are based – an essential aspect for restoring confidence in global digital sector.

The Initiative at a Glance

Based on 3 principles of multilateralism, equal emphasis on security and development, and equity and justice, Foreign Minister Wang Yi gave out 8 key points of the initiative:

1.            To handle data security in a comprehensive, objective and evidence-based manner, and maintain an open, secure and stable supply chain of global ICT products and services.

4.            To encourage companies to abide by laws and regulations of the State where they operate. States should not request domestic companies to store data generated and obtained overseas in their own territory.

5.            To respect the sovereignty, jurisdiction and governance of data of other States, and shall not obtain data located in other States through companies or individuals without other States' permission.

6.            Should States need to obtain overseas data out of law enforcement requirement such as combating crimes, they should do it through judicial assistance or other relevant multilateral and bilateral agreements. Any bilateral data access agreement between two States should not infringe upon the judicial sovereignty and data security of a third State.

7.            ICT products and services providers should not install backdoors in their products and services to illegally obtain users' data, control or manipulate users' systems and devices, and ICT companies should not seek illegitimate interests by taking advantage of users' dependence on their products, nor force users to upgrade their systems and devices.

8.            Products providers should make a commitment to notifying their cooperation partners and users of serious vulnerabilities in their products in a timely fashion and offering remedies. Global data security rules that reflect the wishes of all countries and respect the interests of all parties should be reached on the basis of universal participation by all parties.

It’s actually a quite interesting turn of event that we should be talking about data security so often today – which was not the case when 3G and 4G came along, and when western companies were still in domination in the telecommunication sector. To some extent, the fuss about the “new comers” is understandable for there is yet to be an internationally recognized rule book in this domain for all to abide by. In a way, this initiative is also a compensation for that.

The initiative is partly derived from China’s laws and practices. The relevant Chinese laws clearly stipulate the government shall safeguard the lawful rights and interests of citizens and organizations, including data security and personal information, etc. In practice, the Chinese government has acted in strict compliance with data security principles.

However, it should be noted that China is not trying to set the rules here, as it understands deeply that only rules reflecting the will of all countries can be accepted and implemented in the long run.

China put forward the initiative in the hope to provide a blueprint for the formulation of international principles on data security and open a global process. It would love to see wide participation from governments, international organizations, and multi-stakeholders, just as it welcomes countries to support the commitments of the initiative in bilateral or regional agreements and state policies.

With Digital Bangladesh and Vision 2021, Bangladesh is certainly a key player in the global digital governance with a lot to offer. The country has been making remarkable progress in the digital transformation, registering over 9 crore internet users and above 90% coverage of mobile connections. The rapid expansion of its digital economy and services means that data security is a vital part of the country’s development. And with this new initiative, it will be easier for Bangladesh to form greater policy synergies with China and the rest of the world to create a more reliable and trustful internet environment. It will also facilitate our cooperation as Strategic Partners in areas including information sharing, 5G, e-commerce, etc.

Targeting the US “Clean Network” Initiative? Not Really.

In early August, the US Secretary of State Mike Pompeo launched a "Clean Network" initiative that aims to root out Chinese apps and other tech products from the US internet – another less than dignified act after the unsubstantiated US accusations against Huawei and other Chinese tech companies. In fact, from the Snowden PRISM Project stories, everybody knows that it is the US government that has been carrying out mass surveillance against the other countries including its European allies, which is why some journalist said that the US Secretary of State is the thief who shouts "Catch the thief" when it comes to cyber security.

Nevertheless, China does not mean for its initiative to be a counter response to Washington's "Clean Network" program, as it does not seeks to smear or exclude US technology firms, apps and services providers the same way the latter has done. The initiative is a Chinese approach and a Chinese attitude to the global response to cyber security issues, a Chinese approach on how to properly handle global data security risks. It is also China's commitment to safeguard global data security.

China confirms the aforementioned commitments through bilateral, regional and international agreements, and is calling on all governments and companies including the US government and enterprises to support the initiative, and to jointly shoulder global responsibility in the digital age. To cope with new issues and challenges, all need to work together to jointly build a peaceful, secure, open, cooperative, and orderly cyberspace, and a community with a shared future in the digital world.