A Book on Rabindranth’s Love and Spiritual Illumination 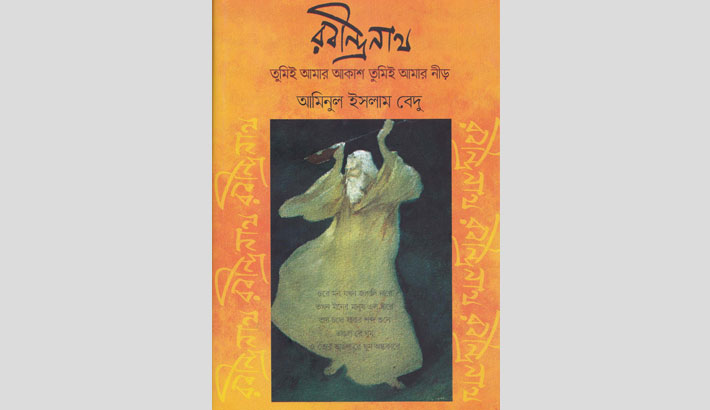 Rabindranath Tagore - the maestro of Bengali literature - had the power to turn every genre of literature into his field. He got success in every genre of literature. Because of his writings and his philosophy, what many people feel for him is akin to worship. Therefore, Rabindranath has become everything for some people. Journalist, organiser and sociologist Aminul Islam Bedu is a person of that kind. He is one of the great Rabindra-lovers of this era who likes to discover different aspects of Rabindranath’s writings. For this purpose, besides reading Rabindranath, he has established Rabindra Academy: the centre for research on Rabindranath. He is the founder-editor of the ‘Rabindralok’: the mouthpiece of the academy. He always tries to pen his new findings in the writings of Rabindranath and publish them. Recently Aminul Islam Bedu’s new book titled Rabindranath, Tumie Amar Akash, Tumie Amar Neer has been published from Samprotik Prokashoni, where Rabindranath’s love and spiritual illumination has been depicted in different ways.

The book includes 13 essays expressing love and spiritual illumination in Rabindranath’s songs, poetry, stories, and dramas. Bedu mainly focuses on Rabindra Sangeet, Tagore’s dramas Chitrangoda and Raktakorobi, his novel Chaturanga, and short stories Hoimonti and Manosi. To evaluate Rabindranath’s love, the author takes references from Victoria Ocampo’s Gurudev. He writes about the admire Rabindranath had for Gautam Buddha. He also penned how the father of the Bangali nation Bangabandhu admired the poet.

In the ending part of the book, the writer discusses Rabindranath unpublished write-up and death. Besides depicting love in Rabindranath’s writings, the poet’s thought on religion that discarded religious extremism and wrong practices in the name of religion, which the poet considered as the misery of human quality, discussed in an elaborated way. The author also mentioned the poet’s desire for non-communal existence among the people. The writer also thinks that Rabindranath has created a new approach to express love feeling by projecting respect in it. Thus the book has been turned into a spontaneous overflow of the author’s feeling rather than just a conventional theoretical explanation of the love of Rabindranath.

Despite being a very common aspect to be written on, the book has some unique features. The expression is quite different here. The author’s feelings for Rabindranath and remembrance in everyday life may impress any reader. Bedu’s journey to different places in the quest to know Rabindranath shows nothing but his love for the poet. Moreover, through his vivid description of the places, he has been to know Rabindranath, any readers can imagine the places before his eyes. Besides, he uses huge references to establish his view. However, typos and spellings mistakes are also there to irritate the eyes. In some cases, it seems that the writer’s argument could have been more precise. The use of language could have also been better. Despite these avoidable shortcomings, the book can keep readers engrossed.

Aminul Islam Bedu was born in Vingrole village in Chattogram on October 30, 1940. He was the editor of monthly ‘Samprotik’ in the 1960s. He worked as a journalist in APP and BSS for 36 years. He wrote eight books, all of them are collections of essays. His book The Newsman: a book was written to assist journalists, earned immense popularity. He was one of the founding members of Bangabandhu Parishad and was the secretary of international affairs. He is a lifetime member of Bangla Academy. Bedu received special recognition from weekly ‘Sakiyat’ for his contribution to journalism.