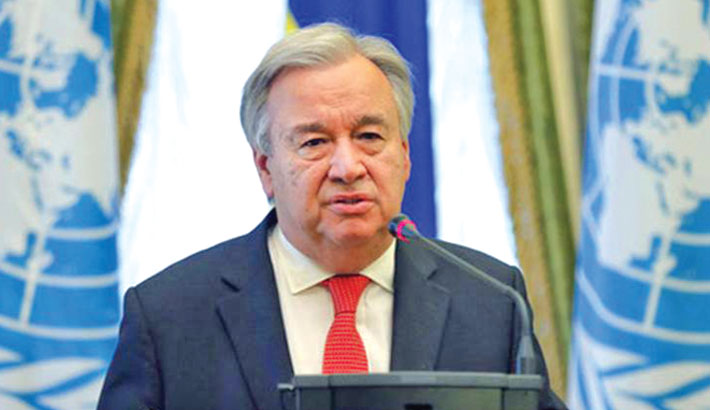 UN Secretary General Antonio Guterres has called for all nations to provide further urgently needed funds to help a global vaccine plan to ensure that everyone, everywhere, gets protection from the virus.

The Access to Covid-19 Tools (ACT) Accelerator and its COVAX facility - led by the World Health Organization and GAVI vaccine alliance - has received $3 billion, but needs another $35 billion, including an “immediate infusion” of $15 billion, Guterres said on Wednesday at a high-level event to mobilize support for the initiative.

“These resources are crucial now to avoid losing the window of opportunity for advance purchase and production, to build stocks in parallel with licensing, to boost research, and to help countries prepare to optimize the new vaccines when they arrive.” Any delay would further widen already vast inequalities, he warned.

The UN chief outlined clearly that to reach that amount, donors’ paying in through official development assistance budgets, will not be sufficient. “We need to think bigger. It is time for countries to draw funding from their own response and recovery programmes. By helping others, they will help themselves”, he said.

The coronavirus pandemic is costing the global economy $375 billion a month and has destroyed around 500 million jobs so far, according to UN news on Thursday.

The Secretary-General called on developed countries – which have devoted many trillions of dollars to respond to the socio-economic impacts of the crisis in their own countries – to “invest a small fraction of that, to stop the spread of the disease everywhere.”

“I call on all countries and partners to significantly step up in the next three months to provide much needed new and additional resources and to mobilize all partners and to put everyone behind a global response to deliver. Solidarity is self-interest,” he stressed.

“Grasping that 21st-century truth is essential to end this crisis and emerge safer, smarter and stronger together,” he said, wrapping up his remarks.

WHO chief Tedros Adhanom Ghebreyesus said the financing gap was less than 1 percent of what the world’s 20 largest economies (G20) had committed to domestic stimulus packages and “it’s roughly equivalent to what the world spends on cigarettes every two weeks.”

The COVAX facility, on its part, is supporting the development of vaccines, he continued, underlining that “now is the time to realize the full power of ACT-Accelerator.”

Philanthropist and Microsoft co-founder Bill Gates, also addressing the summit, said that a vaccine against COVID-19 will help save millions of lives as well as support the development of a plan to eliminate the disease globally.

“A vaccine can make COVID-19 a preventable disease, and no one should die from a preventable disease simply because the country they live in can’t afford the vaccine,” he added, urging action to ensure low- and lower-middle income countries can also access sufficient doses to protect their populations.

Gates announced that the Bill and Melinda Gates Foundation, earlier on Wednesday, had signed a new agreement with 16 pharmaceutical companies.

“In this agreement the companies commit to, among other things, scaling up manufacturing at an unprecedented speed, and making sure that approved vaccines reach broad destruction as early as possible”, he said. The next necessity to eliminate COVID-19, is the funding to pay for those vaccines.

Gates said that the pharmaceutical industry has committed to make the products as affordable as possible, through donations, tiered pricing and foregoing profits, and underlined the need for public funding, to procure vaccines for all.