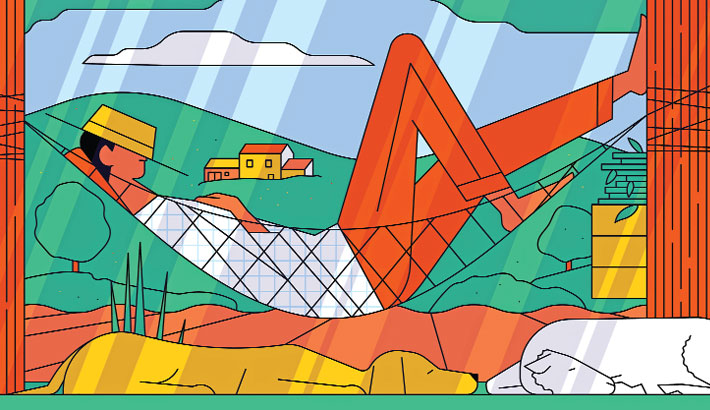 A siesta is a short nap taken in the early afternoon mostly to get rid of the post-lunch drowsiness. Conventionally, it is thought that children and elderly people nap. In many countries, a short afternoon nap is a part of the culture. In our country, young adults are often teased and disgusted when they take a day-time nap. Sometimes they are labeled as lazy and inactive. Sometimes they are ridiculed for not having enough sleep at night as they tend to sleep during the day. And there are many other myths. However, a siesta is very productive and useful for all ages of people.

Firstly, a day-time short nap should not be confused with a night-time sleep which literally cannot be replaced by a short siesta. Anyone who has been suffering from sleeping deprivation cannot refill his or her sleeping quota by taking a nap in the afternoon. A nap time is usually equal to or less than 90 minutes. Nevertheless, a nap can treat sleep deprivation to some extent as it boosts energy, increase memory, alertness and motor performance.

Our brain remains active throughout the day. A busy working schedule and a heavy meal sometimes make us fatigued. In order to overcome this state of weariness, we can, and in fact should, consider taking a short nap of 10-20 minutes in the afternoon. Even when we are at our workplace, we can still enjoy taking a power nap. The Japanese people have a word to strategically napping at job. They call it “inemuri” which roughly means “sleeping while present”. Napping at work is an art, isn’t it?

People, nowadays, have become techno-centric and busy as well. The more we get exposed to digitalisation, the more we forget to take care of our health. Professor Vincent Walsh of the University College London states, “It’s only since the industrial revolution we have been obsessed with squeezing all our sleep into the night rather than having one or two sleeps through the day”.

Still many people manage to take naps in different ways. Sometimes people plan to nap before they become too sleepy. It is called planned or preparatory napping. Sometimes, driving at a stretch can cause extreme tiredness. In such situation people consider taking emergency napping. Young children and elderly people take habitual napping which simply means to nap at the same time each day. Whether it is planned, emergency or habitual, napping is rejuvenating for all.

A short nap of 10 to 20 minutes offers various health benefits. Naps restore alertness and help to remain consistent. Even the military pilots and astronauts found naps extremely helpful for better performance. It lifts our moods too. When we feel sad, tired and exhausted, a short nap can help us boost our energy as well as mood. So, there are many psychological benefits too.

The word NAPS sometimes is elaborated as “Necessary Allowance of Personal Solitude”. From this term, it is clear that naps allow us to take our space where our mind is active and our body reaches the state of restfulness. As humans, we deserve to spend some time in solitude to organise ourselves more.

In order to get the highest beneficial results of naps, we must know how and when to nap. If the duration is less than 10 minutes or more than 30 minutes, we may end up having sleep inertia. Instead of charging our mood, it will cause grogginess and disorientation. Sometimes a longer nap or late afternoon nap can affect nighttime sleep. People end up being insomniac. Those who face troubles sleeping at night should avoid napping during the day. In their case, napping will be ruinous to a good night sleep.

There are many people around us who take longer naps during the day and keep on complaining about their nighttime sleep. Even if they call Mr. Hypnos (Greek God of Sleep) after napping for 2 hours in the late afternoon, they will still awake and count the sheep the whole night. So, it is better to understand the concept and dos of napping first before we end up having sleep inertia.

A siesta is not for all. However, it is also not restricted to a particular age group. There are stigmas which are associated with napping. However, napping does not indicate laziness. There is a nursery rhyme in which there is a beautiful line, “we play the best when we take rest”. This line is written for the children to make them understand that an afternoon nap is important to play and read more in the evening. However, a nap is not meant for the children only. Anyone who is too tired to resume working must consider taking a short nap.

Human beings are supposed to have monophasic sleep pattern. It simply means to remain in one phase of restfulness for a particular time period and then shift to the other phase of activeness. This is why, a good night sleep is always recommended. Getting enough sleep at night on a regular basis is the best way to remain active and charged the whole day. Sometimes, the sleep pattern of children (especially breastfeeding ones) and elderly people (along with new mothers) becomes biphasic and even polyphasic. They sleep in segments. Therefore they need to cover it up during the day. Otherwise, it is more likely that they become tired. So, when tiredness sets in, a quick power nap can do wonders for boosting the mental and physical stamina and getting back to your study or work.