PM for avoiding farmland for industries 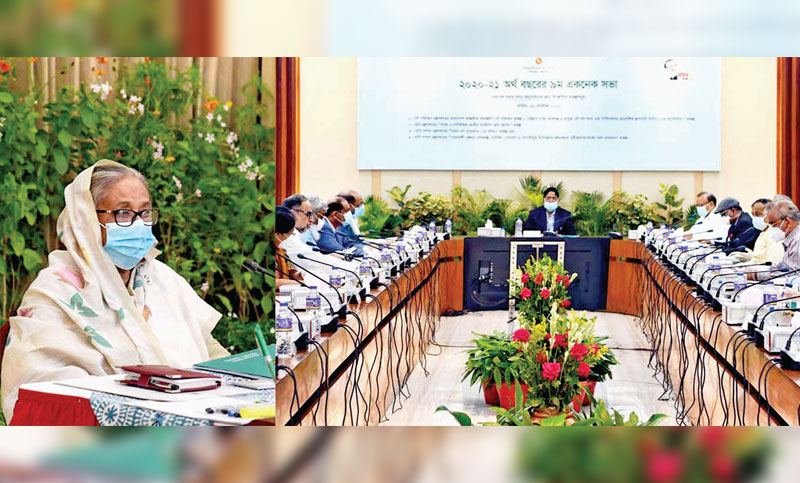 Prime Minister Sheikh Hasina presides over a meeting of the Executive Committee of the National Economic Council (Ecnec) through video conference in the capital on Tuesday.

Four development projects with a total estimated cost of Tk 7.96 billion got nod on Tuesday, including one to make mouza and plot-based digital land zoning across the country.

The approval came from the Executive Committee of the National Economic Council (Ecnec) virtually held with its Chief Prime Minister Sheikh Hasina in the chair.

“Four projects with a total cost of Tk 7.96 billion have been approved at the today’s Ecnec meeting.  Of them, three are completely fresh projects while one is a revised project,” Planning Minister MA Mannan torld reporters at a press conference after the meeting.

Of the total project cost, Tk 6.24 billion will be borne from the state coffer, while the rest of Tk 1.73 billion will come as loan from the World Bank, MA Mannan informed.

Ministry of land will implement the Mouza and Plot-Based National Digital Land Zone Project by June 2024 at an estimated cost of Tk 3.38 billion.

The main objective of the scheme is to establish a computerized central land related data preserving method to help take land management decision at the field level.

Digital land zoning map will be prepared with classifying land plot-wise in agriculture, residential, forest, wetland, commercial, industrial and tourism categories according to quality of land.

Rather, the PM suggested setting up new industries in economic zones as the government will set up 100 economic zones across the country by 2030, the planning minister added.

“Our arable land is depleting fast. So, the Prime Minister has come up with the directive of not setting up industries on agricultural or residential plots,” Mannan said.

While approving two schemes to re-excavate a canal and a river, the PM asked for putting utmost importance to disposal of wastage in the waterway, bus, launch terminals and train stations apart from focusing on only medical waste disposal.

For removing waterways waste, Sheikh Hasina also put special emphasis on a coordination among water resources ministry and the shipping ministry, Mannan also informed.  The Ecnec meeting okayed the first revision of Bangladesh Regional Waterway Transport Project-1 (Improvement of Chattogram-Dhaka-Ashuganj and connecting river routes and installation of terminals and others) raising both the cost and time. The project cost has been raised by 1.49 million as it has risen to Tk 33.49 billion after the revision from the original cost of Tk 32 billion.