‘Hasina a symbol of dev’ 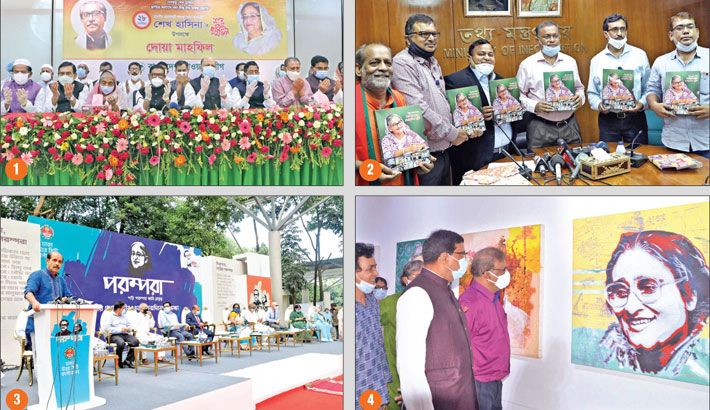 Awami League, its associate bodies and different political and socio-cultural organisations celebrate the 74th birthday of Prime Minister and Awami League President Sheikh Hasina on Monday. (1) Central leaders of ruling Awami League offer munajat at a programme at the party's central office on Bangabandhu Avenue. (2) Information Minister Hasan Mahmud along with others holds the copy of a book titled “Father to Daughter: Independence to Economic Emancipation” after unveiling its cover at the Secretariat. (3) DNCC Mayor Atiqul speaks at a programme titled “Porompora” at Justice Shahabuddin Park in the capital. (4) State Minister for Cultural Affairs KM Khalid admires a portrait of Prime Minister Sheikh Hasina at an exhibition at Hasumonir Pathshala in the capital. —SUN photo

“Sheikh Hasina is the symbol of development as she brought a dignified status for the country in the entire world with glorious achievements,” Quader said while greeting Prime Minister Sheikh Hasina in a virtual briefing from his official residence on parliament premises in the capital.

People across the country celebrated the 74th birth day of Sheikh Hasina who was born on this day in 1947.

Mentioning the day as an unforgettable occasion in the national history of Bengalese, Quader, also the road transport and bridges minister, said Sheikh Hasina, daughter of Father of the Nation Bangabandhu Sheikh Mujibur Rahman, is the source of inspiration to the Bengalee nation.

He said she encouraged the distressed and frustrated people to lead a better life as well as sowed the seeds of dream among them.

The minister said Bangladesh has resolved different longstanding issues with neighboring countries including land and maritime boundary and enclaves because of the able leadership of the premier. Sheikh Hasina opened the door of potential blue economy, he said.

About Bangladesh Nationalist Party secretary general Mirza Fakhrul Islam Alamgir’s remark that anarchy going on in the country, Quader said the country is going towards prosperity overcoming different natural disasters and pandemic under the leadership of the AL government and that is why BNP is becoming jealous.

Terming BNP founder as the father of distortion of history, the AL general secretary said BNP is getting isolated from people day by day because of their politics of falsehood and committing mistakes so that the party workers now do not believe in their leaders.

Mentioning different sabotages during BNP’s tenure from 2001 to 2006, the minister said the country witnessed an anarchic situation during that period.

The entire Bangladesh was drenched with the blood of 21,000 leaders and workers of Awami League during that period while BNP’s repression and persecution on the minority community surpassed the incidents of 1971.