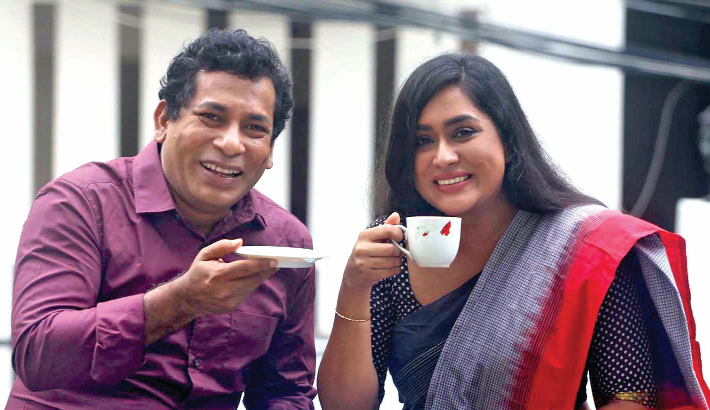 Mosharraf Karim and Zakia Bari Mamo are two popular actors of the country. Recently, the audience-admired artistes have stood before the camera for a special drama titled ‘Mon Doroja’.

Directed by Sagar Jahan, the shooting of the play took place at a location in the capital’s Uttara area.

Mosharraf Karim and Mamo are very hopeful about the drama. Talking about the ‘Mon Doroja’, Mosharraf Karim said, “I have acted in several dramas of Sagar Jahan before this project. I’ve received huge response for these dramas. The story of the drama is very nice. My co-artiste Mamo also a good actress. I hope the audience will also accept the drama like our previous works.”

Mamo said, “Sagar Jahan is a talented director and he has a wonderful shooting unit. He has also a unique directing style.

Besides, my co-actor in the drama is Mosharraf Karim. So, undoubtedly it will be a good work.”

The drama ‘Mon Doroja’ will be aired on a private channel soon.

K M Mosharraf Hossain, known by his stage-name Mosharraf Karim, is a popular actor of the country, works both in films and television. He began working as a theatre artiste in late the 1980s with ‘Nattokendro’, where he has played lead roles in many popular theatre productions for 16 years continuously. He emerged on the television dramas in 1999, with the single-episode TV play ‘Atithi’ directed by Ferdous Hasan and rose to fame for his natural acting and expressions.

Karim was associated with ‘Chabial’ for a long time and worked with film and television director Mostofa Sarwar Farooki on a number of television serials and dramas. His most notable works include ‘Television’, ‘Third Person Singular Number’ and ‘Sikandar Box’.

Zakia Bari Mamo is a model and actress who is best known around the country as Lux Channel I Superstar. After winning the Lux Channel I Superstar beauty pageant in 2006, she came to limelight and got a chance to act in the film ‘Daruchini Dip’. For her role in her debut movie, she received the Bangladesh National Film Awards. She is also a popular face on the small screen.