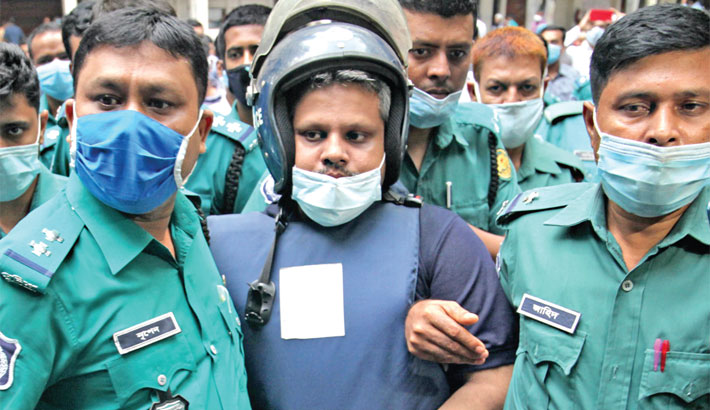 Regent Group Chairman Mohammad Shahed alias Shahed Karim, who was already put behind bars for providing fake Covid-19 test reports, has been sentenced to life in prison in an arms case.

Judge KM Emrul Kayesh of Dhaka Special Tribunal-1 delivered the judgment on Monday after Shahed was produced before the court amid tight security.

The court also awarded Shahed seven years’ imprisonment for possessing bullets. The court in its verdict said both the sentences will be run concurrently.

The prosecution has been able to prove the charges against Shahed undoubtedly and he was given the highest punishment, it added.

“There are many people like Shahed in the society and this verdict will set an example for them.”

“He (Shahed) bought his car by taking a loan of Tk 20 lakh from a bank, but didn’t admit to the court. He is very cunning. As the arms and ammunitions were found in his car, he cannot get any mercy from the court,” the court said in its observation.

Shortly after the verdict, Shahed standing in the dock said he was sentenced wrongly, so he would challenge the verdict in the higher court.

Shahed’s counsel Moniruzzman, however, expressed dissatisfaction over the judgement, saying that they would appeal against the verdict to the High Court.

The court set the date for pronouncing a judgement in the case as both the prosecution and the defence concluded their closing arguments in the case.

During the trial process, the tribunal recorded testimonies of 11 out of 14 prosecution witnesses, including the complainant of the case.

The trial started on August 27 through framing charges in the arms case against lone accused Shahed. DB Inspector Md Sairul Islam, also investigation officer of the case, submitted a charge sheet on July 30, accusing Shahed in the case.

Shahed was arrested by Rapid Action Battalion (RAB) from Satkhira border area on July 15 when he was trying to flee the country by boat.

On July 19, a team of DB police found Shahed’s private car in front of a house in Sector-11 in Uttara area of the capital.

They then seized a pistol with one round of bullet from the car and later a case was filed under the Arms Act with Uttara West Police Station. Shahed was absconding since the RAB raided Uttara and Mirpur branches of his Regent Hospital on July 6 on complaints that it was issuing fake Covid-19 test reports and also charging exorbitant fees.

The RAB also found evidence of at least 6,000 fake Covid-19 test certificates during the raid. The next day, the RAB filed a case against 17 persons, including Shahed, with Uttara West Police Station. Later, 10 other persons were also arrested.