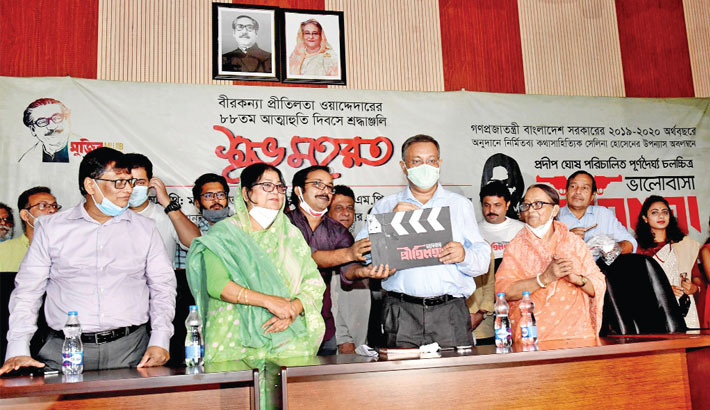 Guests are seen at the ‘muhurat’ of the film ‘Bhalobasha Pritilata’

Popular actors Nusrat Imrose Tisha and Manoj Kumar Pramanik will play lead roles in the film ‘Bhalobasha Pritilata’, which is being made based on some important incidents of first Bengali revolutionary female martyr Pritilata Waddedar’s life.

The cast of the movie have been announced at the Muhurat of the movie at the auditorium of Department of Films and Publications in the capital’s Kakrail area on Thursday.

Information Minister Dr Hasan Mahmud graced the occasion as the chief guest while Chittagong University Vice-Chancellor Prof Dr. Shireen Akhter was present at the programme as special guest with eminent writer Selina Hossain in the chair.

Speaking at the programme, Information Minister Hasan Mahmud said, “Film is not only for entertainment, it is also the powerful way to build the culture of a country. I hope the movie   ‘Bhalobasha Pritilata’ will help the new generation to enhance their thought.”

Produced and directed by Pradip Ghosh, the government-granted movie is the adoption of noted writer Selina Hossain’s novel of the same name ‘Bhalobasha Pritilata’. The film depicts the historical event of anti-British protests in Chittagong in 1932.

Tisha will play the role of Pritilata while Manoj will be seen as revolutionary Ramkrishna Biswas in the film. The other cast of the film include Mannan Hira, Mrinmoyi Rupkotha, Kamruzzaman Topu, Indrani Ghotok, Amit Ranjan Dey and Pasha Mostofa Kamal.

Artist Kanak Aditya is the costume designer while Bappa Mazumder is the music director of the film.