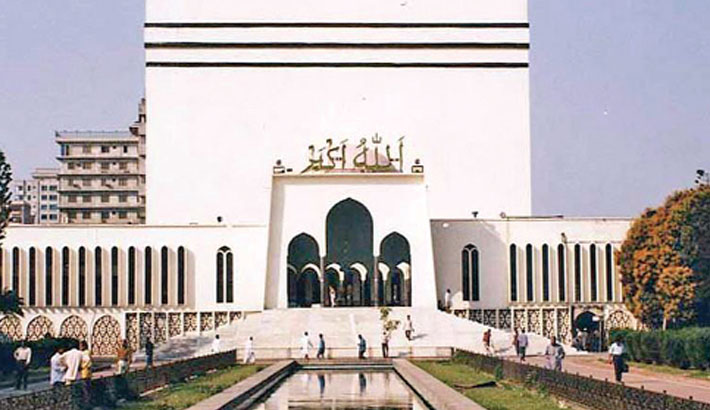 The word ‘Masjid’ (mosque) derives from Arabic word Sujud or Sijdah (to bow down in prayer). Allah (SWT) mentioned the word (Masjid) in the holy Qur’an twenty-seven times. Allah (SWT) says: “And the masjids are for Allah, so do not invoke with Allah anyone.”— (Sura Jinn: 18). The word ‘Masjid’ simply means ‘place of prostration’. Although the word Masjid refers to any place of worship, according to Islamic Shariyah, a Masjid is a place designated for prayer, recitation of the Holy Qur’an, remembrance (Dhikr) of Allah and supplication to Allah (SWT).

It is a matter of great sorrow that nowadays Masjid is restricted to be a place of worship. But, according to the Islamic rule, it is more than just a place for prayer. We find in Islamic history that Masjid played a vital role in the cultural and social life of Muslims. In the early period of Islam, it functioned as an educational, political and social centre of community. Masjids are the best places on earth. As Abu Huraira narrated, “The Messenger of Allah (PBUH) said, ‘The most beloved of places to Allah are the mosques, and the most hated of places to Allah are the markets.’”— (Sahih Muslim). Masjid Quba is the first-ever built mosque by our beloved prophet right after his Hijrat (migration from Makkah to Madinah). The one who offers two rakkats nafl prayer in this mosque, Allah will reward him equal to perform an Umrah. Sahl Ibin Hunaif (RA) narrated, “The Messenger of Allah (PBUH) said: ‘Whoever purifies himself in his house, then comes to the Quba’ Mosque and offers one prayer therein, will have a reward like that for ‘Umrah.’”— (Sunan Ibn Majah).

The importance of praying in mosques is highlighted in the Quran as well. Allah (SWT) says: “Say, ‘My Lord has ordered justice and that you maintain yourselves in the worship of Him at every place of prostration (Masjid), and invoke Him, sincere to Him in religion.’”— (Sura A’raf: 29). Performing five times prayer in congregation in the Masjid is obligatory (Wajib). One who offers prayer at home without any legal excuse his prayer will not be sufficient. We know the story of the blind person (Abdullah Ibn Umm Maktoom). Abu Hurayra (Ra) narrated, “A blind man came to the Prophet (PBUH) and said: ‘O Messenger of Allah! I have no one to guide me to the mosque.’ He asked the Prophet for permission to pray at his home and the Prophet granted it to him. But when the man turned to leave, the Prophet called him and said, ‘Can you hear the Azan?’ He replied, ‘Yes’. The Prophet then said, ‘Respond to it (by going to the mosque).’”— (Sahih Muslim). If there is no concession for a blind man, there should be no concession for the one who can see.

There is a great reward for praying in the mosque. When a Muslim performs prayers in Masjid, Allah (SWT) forgives his sins. Abdullah Ibn Masud (RA) narrated, “…If you were to pray in your houses as this man why stays away (from the mosque) prays in his house, you would abandon the practice of your Prophet, and if you were to abandon the practice of your Prophet, you would go to astray. No man purifies himself, doing it well, then makes for one of those mosques without Allah recording a blessing for him for every step he takes raising him a degree for it, and effacing a sin from him for it.”— (Sahih Muslim).

Allah promises a protection on the Day of Resurrection to the Muslims, who always pray in the mosque. Abu Huraira (RA) reported, “The Messenger of Allah (PBUH) said, ‘Seven are (the persons), whom Allah would give protection with His Shade on the Day when there would be no shade but that of Him (and they are): … a person whose heart is attached to the mosques;…’”.— (Sahih Muslim).

The writer is a national award winner Qari and Khatib of Baitush Shafiq Mosque (near National University), Gazipur