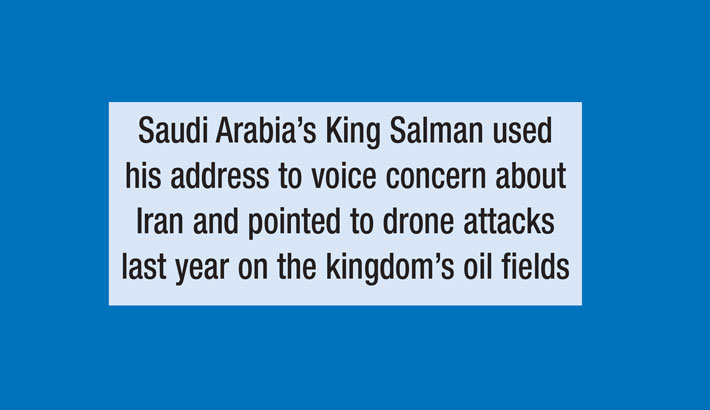 UNITED NATIONS: Arab leaders voiced fears on Wednesday before the United Nations of new conflict in the region as tensions soar between Iran and the United States, reports AFP.

The annual extravaganza of international diplomacy at the UN General Assembly has been turned into a virtual affair this year, with leaders sending in recorded speeches due to the Covid-19 pandemic. Two days after US President Donald Trump ramped up pressure on Iran in a widely contested move, the leaders of Iraq and Saudi Arabia voiced concerns about the region.

“We do not want Iraq to become a sort of playground for other forces that will kill each other on our territory,” President Barham Saleh said in his address. “We have witnessed enough wars and enough attacks on our sovereignty,” he said.

Iraq has attempted a delicate balancing act between neighboring Iran, which shares the Shiite faith of the majority in its Arab neighbor, and the United States, which invaded and toppled dictator Saddam Hussein in 2003.

President Donald Trump in January ordered a drone strike in Baghdad that killed Iran’s most prominent general, Qasem Soleimani, as well as an Iraqi Shiite paramilitary leader, raising calls in Baghdad for the expulsion of US forces.

Trump rejected the calls for a withdrawal but this month ordered a sharp cutback of troops in Iraq as part of his election promise to stop “endless” wars.

Saleh hinted at frustration in Iraq with “anarchic” groups, whose rocket fire on US forces had prompted the drone strike. “Weapons must remain in the hands of Iraqi state institutions,” Saleh said.

He also vowed to tackle rampant corruption, a key priority for Prime Minister Mustafa al-Kadhemi, who came to power after sweeping nationwide protests. Trump has vowed to squeeze Iran, imposing sweeping economic sanctions and leaving a 2015 nuclear accord that was negotiated by his predecessor Barack Obama.

On Monday, Trump said he was enforcing “UN” sanctions for Iranian violations of an arms embargo—despite wide skepticism at the world body that the United States has such authority.

Saudi Arabia’s King Salman used his address to voice concern about Iran and pointed to drone attacks last year on the kingdom’s oil fields, which Washington says were carried out by Tehran in violation of the arms embargo.

“The kingdom’s hands were extended to Iran in peace with a positive and open attitude over the past decades, but to no avail,” Salman said.

“The kingdom welcomed the international efforts to deal with Iran’s nuclear program, but time and again, the entire world witnessed how the Iranian regime exploited these efforts in order to intensify its expansionist activities,” he said, accusing Iran of “terrorism.”

Saudi Arabia has been engaged in a bloody campaign against Iranian-backed Huthi rebels in Yemen, where multiple air strikes have killed civilians and contributed to a humanitarian crisis.

Iranian President Hassan Rouhani, speaking to the United Nations on Monday, pointed to Saudi Arabia as he denounced the unsuccessful US efforts to extend an arms embargo on Tehran.

“They have sold hundreds of billions of dollars of weapons to their clients turning our region into a powder keg,” Rouhani said.