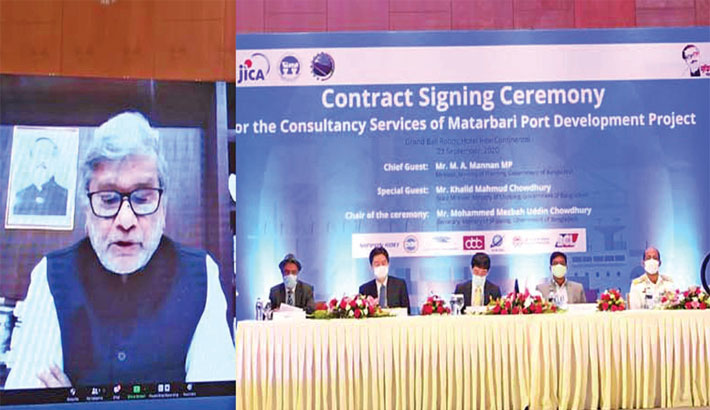 The government has formally approached Japanese constructors for consultancy services for the development of deep seaport in Matarbari of Cox’s Bazar as well as connecting road from port city Chattogram.

There will be constructed a new commercial port connecting road with the national highway from Chattogram to Matarbari to facilitate communications with the neighbouring countries, according to the agreement signed on Wednesday.

Chittagong Port Authority and, Roads and Highways Department (RHD) made due agreements with Japanese counterparts of Nippon Koei and Oriental Consultants Global respectively at Hotel Intercontinental in Dhaka.

Planning Minister MA Mannan connected to the session as the chief guest virtually while State Minister for Shipping Khalid Mahmud Chowdhury was special guest on the occasion.

Addressing the meeting, Planning Minister MA Mannan said Bangladesh has focused on qualitative infrastructure with the Japanese technical and financial corporation as the relationship gain momentum under the leadership of Prime Minister Sheikh Hasina and Japanese immediate past Prime Minister Shinzo  Abe. “These infrastructures (including Matarbari) will lead Bangladesh to the middle income country and in 2041 as a developed country. Planning minister thanks Japanese government and JICA for their excellent support in the development process of Bangladesh,” he added. Shipping State Minister Khalid appreciated the findings of the study that placed the Matarbari deep seaport on the same channel developed by the ultra supercritical coal- based power plant project with a little modification.

The deep seaport will create ‘reliable and low-cost logistic network for seaborne freight handling and transporting facilities to maintain competitiveness of Bangladesh products in the global market, according to the official.

The government has kept the Matarbari port development in fast-track initiatives as Prime Minister Sheikh Hasina and her Japanese counterpart Shinzo Abe jointly announced the concept under the Bay of Bengal Industrial Growth Belt (BIG-B) in 2014.

Regarding the development, Bangladesh received around 25.27 million US dollar loan from Japan International Cooperation Agency (JICA) for the implementation of the project.

The foreign credit will be utilized for the consultancy services for detailed design, tender assistance, construction supervision and one year warranty for Matarbari port development project, according to official statement.

Japanese Embassy charge d affaires Hiroyuki Yamaya said the project will help to strengthen the bilateral relationship between the two countries through the concept of the Bay of Bengal Industrial Growth Belt-Initiative. JICA chief representative Hirata Hitoshi mentioned the mission has been working closely with Bangladesh government since 2017 from the inception of the project and is ready to work until completion of the project.

The main objective of the project is to enhance the cargo handling capacity of Bangladesh through constructing Matarbari Port including link road and thus fulfill the demand of international trade as well as facilitate speedy port services with the neighbouring countries.

Matarbari seaport will be the country’s 4th port after Chattogram, Mongla and Payra and it will be built as a huge port due to the growing pressure of economic activities.