Warns corona is ‘dress rehearsal’ for challenges ahead 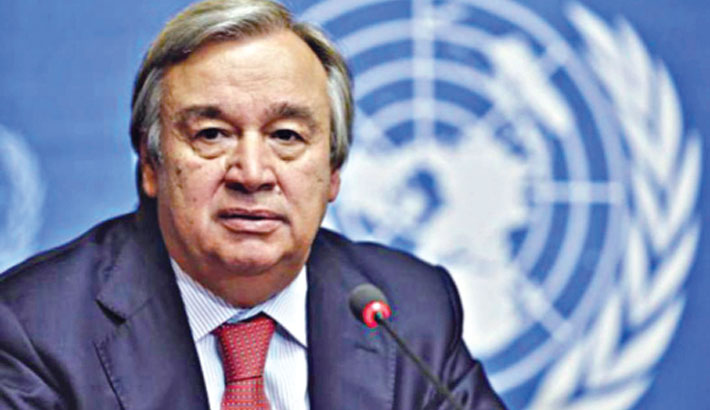 UNITED NATIONS: UN Secretary-General António Guterres on Tuesday appealed for global solidarity to overcome the COVID-19, and repeated his call for a global ceasefire during the pandemic, by the end of the year -a very ambitious target, reports UN News.

Addressing the largely empty General Assembly Hall in New York, Guterres characterised the pandemic from the podium as “not only a wake-up call” but “a dress rehearsal” for challenges to come.

“In an interconnected world, it is high time to recognise a simple truth: solidarity is self-interest.  If we fail to grasp that fact, everyone loses”, he said, delivering his annual report on the work of the Organization.

The Secretary-General underscored the need for solidarity at this moment, particularly as countries least capable to address COVID-19 have received far too little assistance. He urged the UN’s 193 Member States to move forward in humility and unity in the face of the disease.

“And we must be guided by science and tethered to reality”, he added. “Populism and nationalism have failed. Those approaches to contain the virus have often made things manifestly worse.”

Due to COVID-19, most world leaders will not attend the annual gathering at UN Headquarters, known as the General Debate.  Instead, many have pre-recorded their speeches on video, although they have the right to deliver them in person - from their seat in the Hall, not from the podium.

“In a world turned upside down, this General Assembly Hall is among the strangest sights of all”, Guterres remarked at the outset. “The COVID-19 pandemic has changed our annual meeting beyond recognition.  But it has made it more important than ever.”

He said the pandemic has exposed fragilities and inequalities across the globe.  It has generated “an epochal health crisis”, the biggest economic and job losses since the Great Depression, and dangerous new threats to human rights, among other challenges.   As of Tuesday, there were more than 31 million cases of the coronavirus disease worldwide, with over 962,000 deaths.

Guterres also used the occasion to repeat his call for a global ceasefire during the pandemic. The Secretary-General had initially issued the appeal back in March, when he urged warring parties to “end the sickness of war and fight the disease that is ravaging our world”.

Some 180 Member States have endorsed the appeal, as have religious leaders, regional partners and civil society networks. Several armed movements also responded, some of whom announced ceasefires, though they were not sustained.

Guterres saw several reasons to be hopeful now, with the peace agreement in Sudan, and peace talks in Afghanistan, as just two examples. However, he feared terrorist and violent extremist groups will exploit the pandemic.