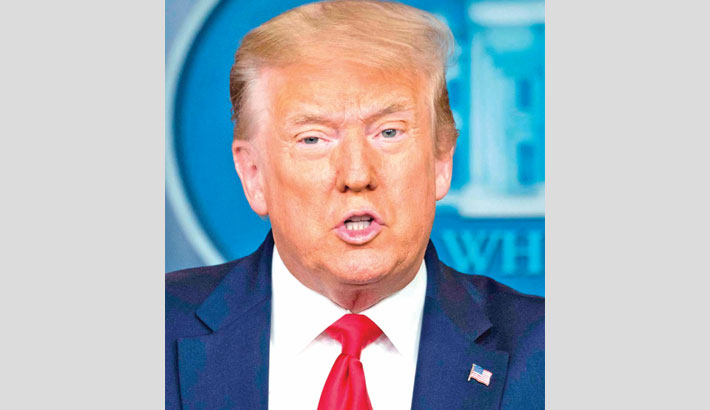 WASHINGTON: Donald Trump has raced to cement a conservative majority on the US supreme court before the presidential election on 3 November, and Democrats’ hopes of keeping the seat empty have faded as two Republican senators signalled their support for moving quickly, reports The Guardian.

The president said on Monday he would name his third supreme court nominee on Friday or Saturday, following memorials for Ruth Bader Ginsburg, the liberal justice who died aged 87 on Friday.

Ginsburg will lie in state at the court on Wednesday and Thursday. Her coffin will rest on the Lincoln Catafalque, a platform built after the assassination of the 16th president in 1865 and loaned to the court by Congress. Ginsburg’s funeral will follow next week, at Arlington national cemetery.

“I think it will be on Friday or Saturday and we want to pay respect,” Trump told Fox News in a rambling interview by phone. “It looks like we will have services on Thursday or Friday, as I understand it, and I think we should, with all due respect for Justice Ginsburg, wait for services to be over.”

With the presidential election only 43 days away, an announcement on Friday or Saturday would narrow even that short window considerably.

Polling shows a majority of the public thinks the nomination should be made by the winner of the presidential election. Democrats also point to the precedent of Senate majority leader Mitch McConnell’s refusal to grant a hearing to Barack Obama’s last nominee, Merrick Garland, in the eight months between the death of Antonin Scalia in February 2016 and the election Trump won.

McConnell and Senate allies say the precedent they set then does not apply, as the Senate and the White House are held by the same party. There is no provision in the constitution on the subject. On the current court, the conservative Clarence Thomas was nominated by a Republican president and confirmed by a Democratic Senate.

A successful nomination would tilt the court 6-3 in favour of conservatives, potentially shaping American life for generations to come.

Two Republicans, Lisa Murkowski of Alaska and Susan Collins of Maine, have said they do not support efforts to bring a nomination to a vote. That leaves McConnell with a 51-49 majority – enough to get the confirmation through. One more defection would produce a tie that would be broken by the vice-president, Mike Pence. Two more would sink the effort.

Democrats had hoped to get similar support from Cory Gardner, the senator for Colorado, who faces a tough re-election race in Colorado, and the Iowa senator, Chuck Grassley. But both men said on Monday they would vote to confirm a qualified Trump pick.