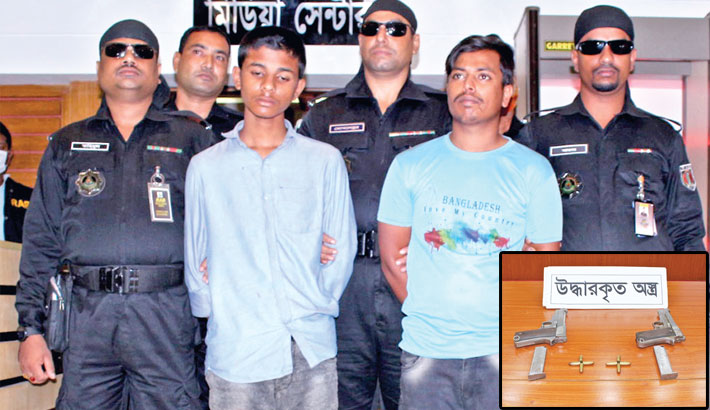 RAB personnel on Tuesday produce two members of a teenage gang ‘The Boss’ before journalists after arresting them from the city’s Dakshinkhan area in connection with the killing of Sogah. Inset, firearms, magazines and bullets were seized from their possession. —SUN photo

Rapid Action Battalion (RAB-1) on Monday night arrested two members of a teenage gang “The Boss” in connection with the killing of Sogah.

The arrestees are Mahbubul Islam Russell alias Cutter Russell, head of the gang, 20, and his fellow Mohammad Hridoy, 20.

RAB-1 Commanding Officer Lieutenant Colonel Shafi Ullah Bulbul said this in a press briefing held at the RAB Media Centre of Kawran Bazar in the capital on Tuesday noon.

The duo was arrested from the capital’s Dakshinkhan area. The elite force also recovered two foreign-made pistols and eight rounds of bullets from their possessions.

Lt Col Shafi Ullah Bulbul said the elite force faced difficulties to arrest the duo as they applied different tactics to avoid arrest. “They didn’t use mobile phones and changed their locations frequently,” he said.

Shafi Ullah Bulbul, also director (operations) of the RAB, said, “Russell established the gang in the Uttara area consisting of 10 to 12 members. Local people avoid them for their rowdy movement and manners.”

On August 27, Sohag was stabbed to death in the capital’s Uttarkhan area.