In a sea of fluffy whiteness 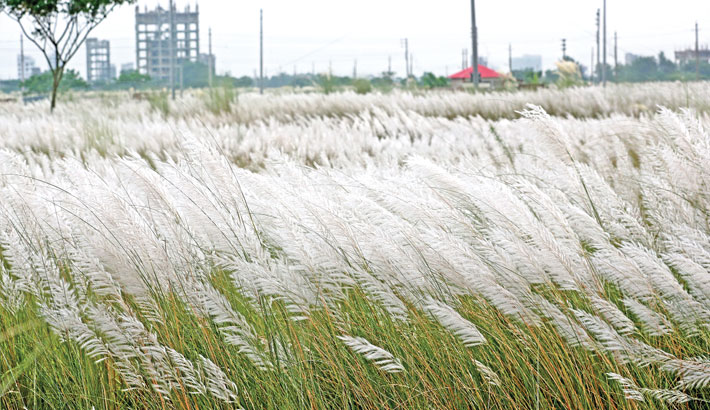 Kans Grass (Kashful in Bangla) blooms in a field in the capital. The flower symbolises Bangla season Sharat (autumn). The photo was taken on Tuesday. —Reaz Ahmed Sumon

Monsoon has already bid farewell making way for clear blue skies and parades of white clouds and far below them wild bushes of Kashphul or kans grass (as it is called in English) have started growing here and there proclaiming the arrival of autumn.

Urban nature lovers can sooth their eyes visiting massive Kashphul fields in different areas of the.

The winged seeds of the flower tossing around in the air will offer the sightseers a plenty of opportunity to relish the spectacular scene.

The combination of expansive fields of Kashphul with their gentle swaying by the breeze and the beautiful azure sky speckled with cottony clouds will surely make someone drift off into reverie.

However, the Kashphul fields are the benchmarks of rural magnificence. White seas of fluffy flower-stalks covering newly formed lands, shoal and the river banks provide the visitors with an amazing experience there.

A journey to the riverine countryside and suburban areas can remind one of the classic scene projected in Satyajit Ray’s celebrated film ‘Pather Panchali’ where Apu and Durga, the brother and sister, run gingerly through a field of Kashphul to catch a glimpse of the train.

Apart from pleasing eyes, Kashphul has another aspect. It is a source of sustenance for marginal farmers. The harvest of Kash supplements their meager incomes every year.

Besides, some rural women there manage daily family expenditure by making brooms with Kashful during late autumn.

Kashphul (Saccharum spontaneum) is actually a perennial native to the subcontinent. The three-meter tall aquatic plant is the symbol of autumn season.

Of course, Chhatim flowers amazes all with their dizzying, almost hypnotic, fragrance during this season. Kash also faces stiff competition from another autumnal sibling Shiuli.

Yet, popular representations of autumn have not found a place for either Chhatim or Shiuli. Bengalis’ autumnal setting is inevitably bedecked by Kashphul.