Ratargul watchtower made off-limits to tourists 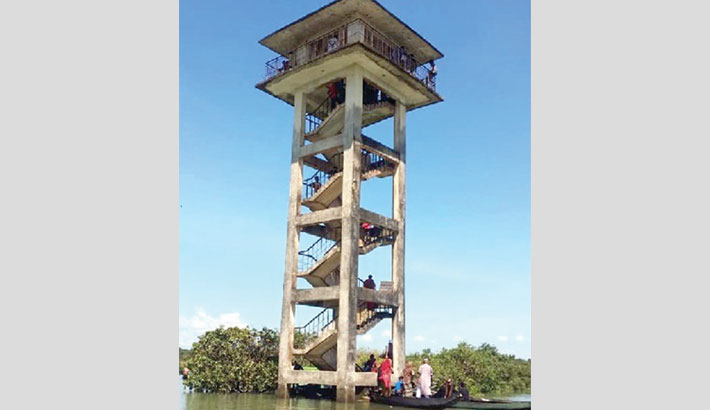 SYLHET: Built barely six years back, the watchtower at Ratargul Swamp Forest, one of the country’s most popular tourist destinations, in Gowainghat Upazila of Sylhet, has been closed to tourists as it has turned risky.

Environmentalists said the forest department built the tower inside the forest in 2014, defying their objections and now it has got tilted and turned risky within six years of its construction, reports UNB.

The department on Sunday came up with an order of ban, making it off-limits to tourists. Forest department officials said a signboard in this regard was hung up after the ban had been imposed.

The tower, in fact, turned risky a long time ago and the department put up a signboard instructing that only 4-5 people can climb the watchtower together, said Saad Uddin Ahmed, forester of Sylhet Forest Division.

“But no one follows the rule. Accidents may happen any time. So, we’ve closed the watchtower to tourists from today until further notice,” said the official.

The forest caught the attention of tourists after reports run by a few media outlets in 2012.

Hundreds of people then started visiting the spot every day to enjoy its unique beauty and biodiversity.

Aiming to promote tourism, the department constructed the watchtower and several other structures in the forest spending Tk 90.62 lakh, ignoring protests by environmentalists.

The environmentalists had warned that the tower would increase the number of tourists inside the forest which would destroy its environment and biodiversity.

At one stage, the construction work on the tower was halted twice in the face of the protests, but it was later completed and opened to tourists.