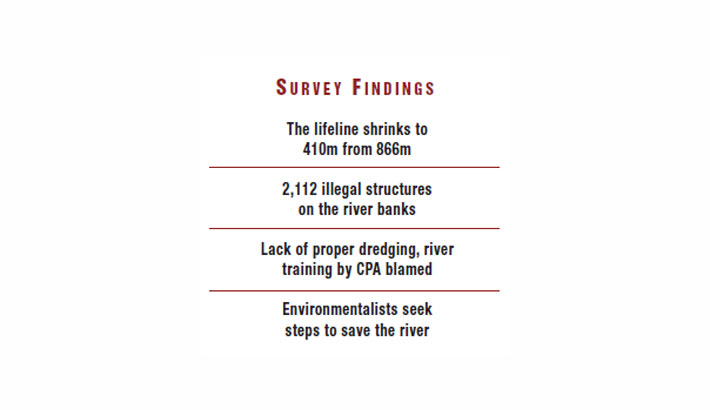 CHATTOGRAM: The width of the river Karnaphuli has shrunk to 410 metres from the 866 metres at its Shah Amanat Bridge to Firingee Bazar Monohorkhali areas, said a latest survey report.

Under the banner of ‘Chattogram River and Canal Protection Movement’, the environmental activists claimed this while disclosing the ‘Karnaphuli Encroachment Survey Report-2020’ at S Rahman Hall of Chattogram Press Club on Monday.

The organisation member Aliur Rahman read out a written statement in this regard at the press conference.

Describing the survey report as unprecedented, the organisation member said they conducted a 21-day survey from Shah Amanat Bridge to Firingee Bazar Monohorkhali of the river to reveal the actual width of the river.

“There is no alternative to implement the master plan for uninterrupted navigability of the river and activities of the port,” said the member.

Lack of proper dredging and river training by the Chattogram Port Authority (CPA) put the river in trouble further, he claimed.

He also give emphasis on bringing back the actual navigability of the river through evicting different illegal structures including the Mariners Park and Ice factories from the river banks.

According to the survey conducted by the district administration based on BS Record, there are 2, 112 illegal structures on the river banks while some factories lack effluent treatment plant.

In the report they also said steps will have to be taken to remobilise the port activities at the Bangla Bazar, Sadarghat, Chaktai and Rajakhali areas through regular dredging and river training.

In the briefing, the environmentalists urged the authorities concerned to take immediate steps to save the river Karnaphuli, considered as economic lifeline of the country, from encroachment and pollution to bring back its actual navigability.