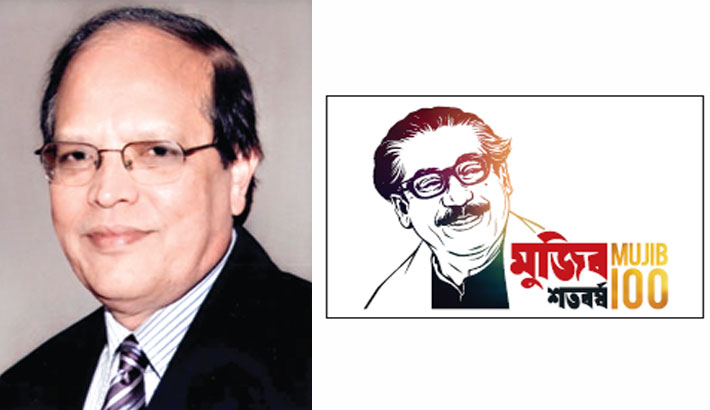 Before leaving Calcutta for good he went to say goodbye to his mentor Suhrawardy who was still busy in protecting the hapless Muslims along with Mahatma Gandhi. The message he gave to Sheikh Mujib was very clear. He said to him, “When you go back to your country try to ensure communal harmony. If there is trouble in East Bengal it will be catastrophic. Try to ensure that Hindus don’t flee Pakistan. If they are forced to come here they will stir up trouble and that will result in an exodus of Muslims to East Bengal.”(‘The Unfinished Memoirs’, UPL, 2019, ninth impression, p.87). He remained committed to this pledge to maintain communal harmony throughout his life. In fact, he was deeply in it from his school days. However, he was also a pragmatist. While naming the East Pakistan Muslim Student League his co-leader Oli Ahad strongly opposed the idea keeping the word ‘Muslim’ in it. But Sheikh Mujib had this to say him,” The time hasn’t come for such a name yet. We have to take into consideration the political situation and the mood of the people. The name itself isn’t important. If we hold on to our principles we could change the name at a later date. We have attained Pakistan only a few months back. It will take some time to change the mindset of the people…” (ibid, p.94). And it has been proved later that how prophetic he was on this issue. And we know by now how actively he got involved into the Language movement and other pro-people struggles for which he had to go to jail a number of times. But in the process he began to emerge as the significant protagonist of the people of East Bengal, in particular. After spending about two years in jail he was finally released in late February 1952 and immediately got into the organisational activities of the newly formed party East Pakistan Awami Muslim League. He was made the Joint Secretary of the party while he was still in jail. In fact, when he started reorganising the party he was acting Secretary of the Party. He continued to strengthen the base of the party with Maulana Bhasani as the President keeping close contact with his leader Suhrawardy. His party was so strong that it was ready to challenge the ruling Muslim League which quickly degenerated under the pressure of power and malgovernance. Yet, he was keeping close contact with other opposition parties and together they formed the United Front under the joint leadership of A.K. Fazlul Huq, Bhasani and Suhrawardy. The United Front had a landslide victory in 1954 election and formed the government in East Bengal where Sheikh Mujib was the youngest Minister. The Government didn’t last long and sheikh Mujib was again put behind the bar under Security Act. He got release after about ten months and then resumed his political activities.

As a member of the constituent assembly he played crucial role in flagging the major issues that were close to the hearts of Bengalis. He travelled across the country with his colleagues and addressed meetings with thousands of people attending the same. He demanded for the release of the political prisoners who were still in prison. He also addressed issues related to the price of salt, abolishment of zamindari system, provincial autonomy, Bengali as state language, one-unit plan (treating all of West Pakistan was one integrated unit), and invariably corruption.

He said in a speech, "We want immediate release of all political prisoners, abolition of the system of realisation of rent through certificate, declaration of 21st Feb a holiday, permission to erect a Shaheed Minar...If the Ministry does good works and can root out corruption and bribery I promise that I shall not seek election to the Legislative Assembly...I have said at  Karachi that we can form coalition with any party in the centre provided they accept our demand for full provincial autonomy for East Bengal and Bengali as one of the State Languages of Pakistan" (‘SECRET DOCUMENTS OF INTELLIGENCE BRANCH ON THE FATHER OF THE NATION BANGABANDHU SHEIKH MUJIBUR RAHMAN’ edited by Sheikh Hasina, 2019, Volume-4, page-315).

When we read about Sheikh Mujib and also his own writings, we can easily tell that he was a leader who loved all Bengalis regardless of their religions. He was a true secular and liberal leader. As someone who witnessed communal riots during his student days, he knew very well the need for unity among people of all religions. He wrote regarding the riot that took place in 1947, "No sooner had the Calcutta riots ended than rioting broke out in Noakhali. The Muslims there had started looting Hindu houses and torching them. Dhaka was witnessing riot after riot. As if in response, Bihar was in flames too. In districts throughout Bihar Muslims were being attacked in a planned way. This resulted in many deaths. Many houses were being destroyed there." (‘The Unfinished Memoirs’, page-72). Mujib went around the relief camps and worked hard in helping those affected by the riots. Many volunteers had fallen sick and young Mujib was no exception. (ibid, p. 75).

Earlier, when Sheikh Mujib was in prison during the language movement, another communal riot had broken out in Dhaka and Calcutta. Some of those rioters were also put to jail in the same ward as Mujib. He wrote, "I tried to tell the jailed ones that it wasn't right to get involved in rioting and the killing of people; it was, in fact, a sin to kill innocent people. A true Muslim couldn't kill anyone who was blameless; God and His prophet had forbidden such action. God created Hindus as well as us. They deserved to be treated as human beings too. Just because some Hindus in India were involved in heinous actions did not mean we should be perpetrating violence here. I exchanged views with many people of our city who were known for their violent tendencies; many of them told me that they would stay away from rioting from now on." (ibid,p. 165).

Sheikh Mujib also wrote about the quality of Pakistani leaders during 1954. He mentioned that Pakistan was supposed to be a democracy where people of all races and religions would be equal. However, the leaders were just using religion to achieve their own self-interests in the newly born Pakistan forgetting their own pledges. (ibid,p. 244).

Not surprisingly, the word 'Muslim' was dropped from the name of the party 'Awami Muslim League' and party came to be known as 'Awami League' from then on reaffirming its secular principle. The decision was made during a council session of Awami League that started on 21st October and ended on 23rd October, 1955. According to SA Karim, Mujib had been trying to officially make the party secular 'for well over a year'. He was positive that it would be possible to confront the West Pakistani oppressors if the people of Bengal were united regardless of their religion (Karim, S.A. ‘Sheikh Mujib: Triumph and Tragedy’, UPL, 2009, revised, p.69).

Sheikh Mujib carried forward the principle of secularism throughout his political journey. In his pre-election TV and radio speech in 1970, he said,

"The members of the minority community should know that we have always stood against every form of communalism. They shall enjoy equal rights with all other citizens and shall enjoy equal protection of the laws. Every effort must be made to develop our tribal areas so that these areas can be fully integrated with other areas and the tribal people are able to enjoy equal opportunities with other citizens in all walks of life. What we need is a new constitution that guarantees these opportunities" (Translated by Haider Khan).

Even in the historic speech of 7th March, Bangabandhu Sheikh Mujibur Rahman talked about being united as Bengalis regardless of religion. He was also careful about ensuring security of the non-Bengalis who were living in Bangladesh.

So, none was surprised to see secularism as one of the four pillars of the constitution of independent Bangladesh. When Bangabandhu returned to Bangladesh on 10th January in 1972, he said, "I want to say it clearly that, Bangladesh will be an ideal nation. The foundation of the country will not be a religious one. The foundation of the nation will be democracy, socialism and secularism. The farmers-labors and Hindu-Muslim of this country will live in peace and harmony." (Translated from Bengali).

The author is Bangabandhu Chair Professor, Dhaka University and former Governor of Bangladesh Bank. He can be reached at [email protected]