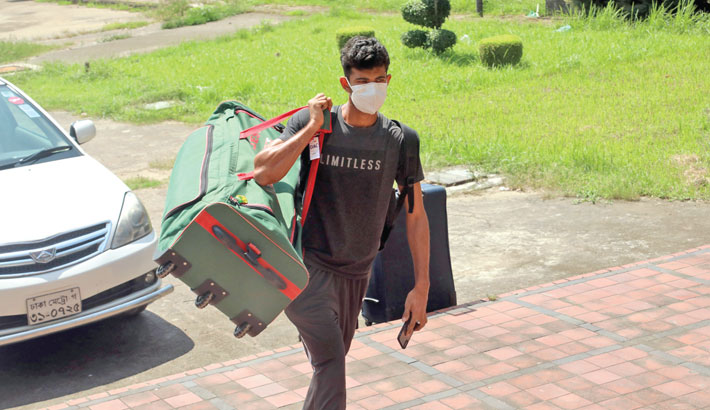 Bangladesh cricketers are excited to get back into a proper training module leaving behind the individual training session as they are scheduled to get into bio-bubble today.

The 27-member Bangladesh squad will enter into the bio-bubble environment from January 20 ahead of their Sri Lanka tour for the proposed three-match Test series.

BCB already hired two floors to keep the cricketers and the supporting staff for the tour while the board officials insisted that the hotel staffs that are expected to work with the team will be living in a separate dormitory and they have completed the test of the drivers expected to carry the cricketers from hotel to the ground.

BCB is planning a week-long residential camp ahead of the tour that will mark the resumption of competitive cricket for both sides. The residential camp is set to begin on September 21. The BCB will conduct the next COVID-19 tests respectively on September 21 and 24 and the final test of 72 hours before they take the flight to Sri Lanka.

Bangladesh Test skipper Mominul Haque said that they are not worried to get into a bio-bubble as eventually it gives them a chance to have some proper training session under their belt.

“We are focused much on that as we will get a chance to play. We are practicing in our own country as we have a chance of playing a series,” he said.

“It is working more without looking in any other direction. There are must be some difference, playing is the actual thing. We have been out of playing for a long time. We will get back to play, this is the biggest thing,” he said.

“Now, everything is new and we have adapted to everything during the last six months that was not normal and as could do that we are expecting to adapt to it (going into the bio-bubble),” he said.

“I am not in worried because we are struggling for the last six months for being without cricket and we are very excited to return back,” he said.

Bangladesh’s tour of Sri Lanka, which was scheduled for July-August, was postponed because of the COVID-19 pandemic. They’re now expected to travel to Sri Lanka on September 27, with the first of the three Tests beginning on October 23.

Due to uncertainty, BCB insisted that they have formed a squad for skill camp rather than calling it a preliminary squad for the Sri Lanka tour stating through official email that the Bangladesh team’s skill camp begins today at the Sher-e-Bangla National Cricket Stadium in Mirpur and keeping in mind the restrictions and safety measures for COVID-19, the squad’s training and movement will be regulated through the creation of a Bio-Secure Bubble.