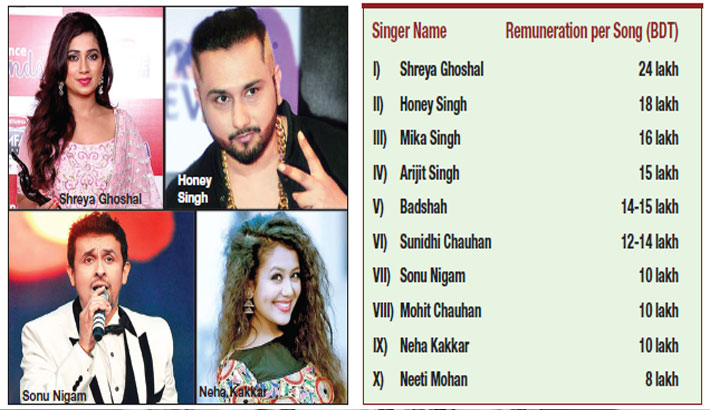 Every singer has a different talent so on the base of talent paid very highest for the song. Here is the list of the top ten highest paid singers in the Bollywood and their’s remuneration per song in Taka.

Shreya Ghoshal (24 lakh): Rising to fame from a singing reality show, Ghoshal caught the eye of Sanjay Leela Bhansali . She sang a song in the super-hit movie ‘ Devdas Devdas ’ and earned herself a coveted spot in Bollywood. She, along with her successful singing career also judges various singing reality shows. Shreya Ghoshal’s renumeration for per song about 24 lakh.

Honey Singh (18 lakh):  On a sabbatical to deal with alleged drug abuse problem, Honey Singh continues to rule the hearts of youngsters all across the India. Unabashed claims about his humble beginnings and loud shout outs to fans for helping him reach the heights of success he has, the singer enjoys an audience of all ages, both at home and abroad.

Mika Singh (16 lakh): Having been in the industry for as long as he had, Mika Singh has spread his wings in more than one direction. He not only sings for movies but also does Tours and Live Shows that earn him more money than most of his contemporaries, and if that is not enough he has also ventured into acting.

Arijit Singh (15 lakh): The soulful voice of Arijit Singh, was rejected from a reality singing show. He later rose to prominence from hit playback numbers in “ Murder 2 Murder 2 ” and “Aashiqui 2”. He is today one of the most sought after male playback singers in Bollywood, with an estimated 6 million USD in his kitty.

Badshah (14-15 lakh): Aditya Prateek Singh Sisodia, better known by his stage name Badshah, is an Indian rapper and singer known for his Hindi, Haryanvi, and Punjabi songs. He started his career in 2006 alongside Yo Yo Honey Singh in his hip hop group Mafia Mundeer. He split from Honey in 2012 and released his independent Haryanvi song Kar Gayi Chull, which was later adopted into the 2016 Bollywood movie, Kapoor & Sons.

Sunidhi Chauhan (12-14 lakh): The first lady of her generation of Bollywood singers, Sunidhi is quite a household name. She also has had a successful stint with TV as the judge and coach of various popular reality singing shows.

Sonu Nigam (10 lakh): He is the singer who has done it all and that too in the grandest of ways possible. He has lent his voice to Social Events, Bollywood and Music Videos. He has hosted music shows. He also does international tours, packed with audiences that go gaga over his performances. Not only this, but he has also tried his hand at acting and has been the judge for various singing reality shows.

Mohit Chauhan (10 lakh): With a slew of hit numbers and a ton of awards in his pocket, Mohit Chauhan, is arguably the most versatile singer of Bollywood. Not only does he have a lot of playback singing options, but he is also the lead vocalist of the Indi-pop band, ‘Silk Route Silk Route ’. His shows and concerts in India are always packed with an audience of all age groups.

Neha Kakkar (10 lakh): From doing solo albums to now being the voice of leading Bollywood actresses, Neha has shot to fame, and with numbers like Kala Chashma, it looks like she is in for the bigger slots.

Neeti Mohan (8 lakh): Neeti Mohan although not as popular as her female counterparts, has been turning heads ever since her 'Ishq Wala Love' debut in ‘Student Of The Year’. She has also bagged some assignments on the small screen due to her flourishing bit with playback singing.       —Source: Agencies