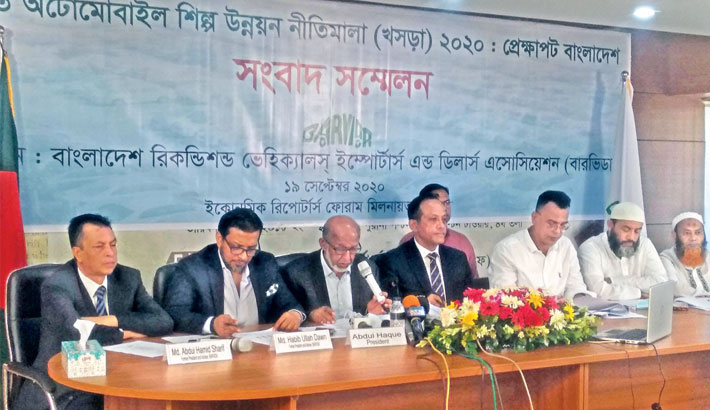 BARVIDA thinks that the proposed automobile industry policy 2020 will help establishment of merely a screw driving industry which will produce under quality cars and will also undermine the consumers’ rights to have better cars as they would be compelled to buy those cars from the local manufacturers.

It also said if the proposed policy is adopted and finalised to produce cars in the country, then the option of export of the cars from the country should also be incorporated in the policy so that a healthy and competitive business environment can be practiced in the domestic car markets.

BARVIDA leaders made the observations at a press conference at Economic Reporters Forum (ERF) auditorium in the city on Saturday.

Presided over by Secretary General of BARVIDA Mohammed Shahidul Islam, its President Abdul Haque made a power point presentation at the programme.

At the programme, the association has come up with some important points with regards to the proposed automobile development policy 2020, considering the current and futuristic views of the car industry.

In such a situation it needs to consider how much sustainable it would be for any international companies to set up a car making plant in the country. Moreover, there should have a condition of 30 percent value addition locally in case of spare parts assembling. Welcoming the initiative of formulating policy, BARVIDA leaders said it is always in favour of establishing sector based new industries in the country. They will feel proud if Bangladesh has ‘National cars’ or ‘Made in Bangladesh’ brand cars, they mentioned.   However, BARVIDA also thinks, it is necessary to consider the current state of the industries concerned, experiences of other countries and the existing realities of the country, before allowing of establishment of any kind of industry in the country.