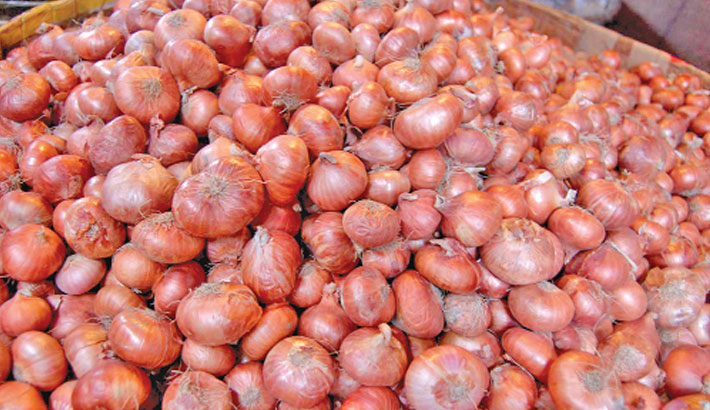 India has decided to allow export of some quantity of onions which was handed over to the customs on the date of imposing the ban on onion export.

The ban will not be applicable for those pro-contracted shipments and necessary directives have been given to allow such eligible consignments, according to Indian Ministry of Commerce and Industry.

But there will be no more new contract henceforth until the notification is revised, a senior official told UNB.

The Indian government imposed the ban on onion export on September 14.

The data of onions lying for exports in various custom ports of India was provided and from the data shared, it appears that some quantity of onions was already handed over to customs on the date of notification (export ban). The restrictions imposed on export shall not be applicable to consignments already handed over to Customs for examination and subsequent exports up to public notice or notification date, reads an official communication.

Earlier, Bangladesh shared its “deep concern” with India at the sudden ban on onion exports saying it “undermines” the discussions that took place in October last year and January this year.     “The latest “abrupt announcement” of the government of India “undermines” the discussions that took place in 2019 and 2020 between the two friendly countries on the matter and the understanding shared, the Ministry of Foreign Affairs wrote to Indian High Commission in Dhaka on September 15.

Bangladesh referred to the Commerce Secretary-level meeting between the two countries held on January 15-16, 2020 and VVIP visit to India in October last year when the Bangladesh side requested regarding the matter.

“I wish you had informed us before suddenly putting a halt in export of onions. I had to tell my cook I have no other option but to have my food without onions. I would request India to please inform us beforehand while taking such an action. After all, we are neighbours,” Prime Minister Sheikh Hasina said in Hindi in a programme in India in October last year (according to Indian media).

The Ministry of Foreign Affairs mentioned that the sudden announcement of amendments in India’s export policy of onion directly impacts the supply of essential food item in Bangladesh.

“I heard that the Indian Ministry of External Affairs is very repentant. Because they didn’t know about the sudden ban,” he said.

Dr Momen recalled that they had an understanding between the two countries that they will inform beforehand while taking such “abrupt decision.”

It would have been better, if Bangladesh knew about the ban beforehand, he said.

The Foreign Minister said there is nothing to worry about onion as there is adequate stock of it in the country.

Meanwhile, State Minister for Foreign Affairs M Shahriar Alam said the country has a stock of around 5.6 lakh tonnes of onion and import of 11,000 tonnes onion is under process.

He said the monthly requirement of onion in the country is 2 lakh tonnes.

The government has decided to import onions from multiple sources to ensure enough supply of the key cooking ingredient in the local markets.

In line with the decision, the government has already taken steps to import onions from Turkey and Egypt, according to the Ministry of Foreign Affairs.

The consignment of the onions is expected to reach Chittagong port early next month.